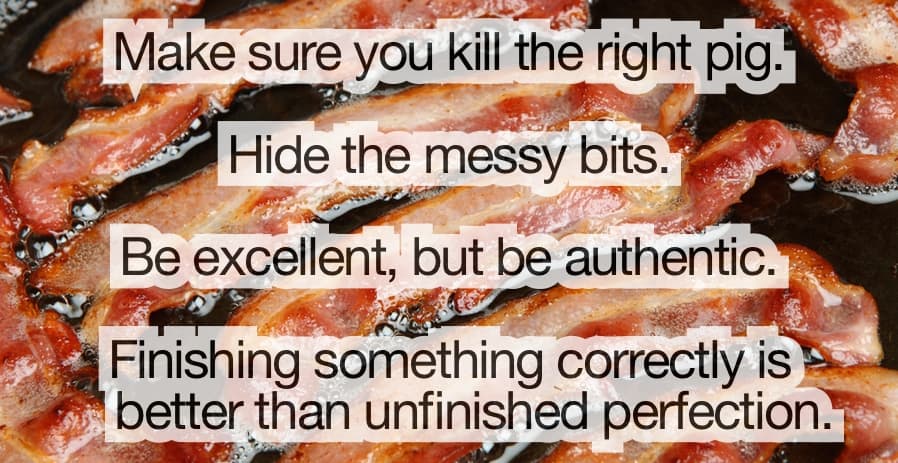 Out of consideration for all of those who don’t want to think about where your bacon and pork chops come from, I’ve opted not to include any photos from the butchering in this post.

Yesterday, in the cool autumn morning, the conclusion of six months of pig raising came to an end. The ranch butcher, and his wife, arrived in their “butcher-mobile” and within twenty minutes, what were before, two 200+ lbs. running, snorting, digging and eating machines, were now, large hunks of meaty goodness, that bore absolutely no resemblance to anything you’d find in the field or pen.

The bacon maker, Ramiro Azevedo, and his wife, Cathy, had a chatty, down-home style to their demeanor that contrasted sharply with the precision of the work. At first, I didn’t care for it. But, since they left, the more I’ve thought about their style, the more I’ve become impressed with it. I realize now, that there are four excellent business lessons to share from the ranch butcher and his wife:

Don’t Kill the Wrong Pig: Always Make Sure That Your Services Match Your Customer’s Expectations

The very first question the butcher asked, upon getting out of the truck with his rifle, was “You want me to kill those two pigs in that pen, right? Because once I do, I can’t make them alive again.”

I laughed, and said, “What? Yes, of course.” But then I realized, no, not of course. He had to ask that question!

How many times have you done something for someone, in response to a request, only to find out later that you misunderstood the requirements of the project all together? No matter how great the work was, if it isn’t what they wanted, it’s worthless.

And, in the case of our ranch butcher, it’s more than worthless. It actually incurs expense on the customer to kill the wrong animal. And, butchers that butcher the wrong animal don’t stay in business long, and neither will you if you don’t listen to your customers.

Hide the Messy Bits: Don’t Let Them See the Unpleasant Parts of Your Business

While the butcher was dispatching the pigs at the rear of the truck, the butcher’s wife was conscientiously asking me a series of questions at the front of the truck.

Where were they supposed to take the meat, what was my name and telephone number, how’d I hear about them, etc. The questions seemed to go on and on until the crack of the rifle had sounded twice.

The butcher’s wife was all business during the deadly serious part of the process. Her all-business demeanor, her questions, and her obvious placement in relation to the truck, and the pigs, distracted me during the most unpleasant moment of the whole process.

The products and services that we provide to our customers don’t just magically appear. They may take sleepless nights, sweaty days or all kinds of smelly ingredients. Our customers don’t need to think about this. Distract them, like the butcher’s wife did me.

Be Excellent at Your Work, But Be Authentic

After the killing was done, I moved to the rear of the truck to watch to the butchering. Removing skin, and the internal organs from a carcass that just moments before was a living, breathing creature, is kind of a disgusting thing to see.

But there was a part of the process that was just absolutely amazing: the skill with which the butcher and his wife completed their work. They both moved with a practiced fluidity, as if they were robots in a factory. It was absolutely amazing to see: there was no wasted effort, no second thoughts, no getting in each other’s way.

And yet, the butcher and wife, talked constantly during the process – to me, to each other, to themselves. They told me stories about their “no good” neighbors, about how they spoil their nieces and nephews, the tricks they play on each other, and that it was the butcher’s birthday today.

In one sense, their personal drama wasn’t any of my business, and there was no reason for involving me in any of it.

But, their talk made them alive. Whereas their amazing skill will soon be able to be replaced by actual robots, their humanity won’t be. And that’s what they’re selling. Anyone with years of experience, or a robot with enough programming, can butcher a hog with practiced skill, but only two humans can banter like the butcher and his wife did.

Finishing Something Correctly is Better Than Unfinished Perfection: The Perfect is the Enemy of the Good

The ranch butcher had a new truck since I’d seen him last, and I asked him about it.

While the butcher did his work, the butcher’s wife explained that the old truck died on a Wednesday, they found a new one on Thursday, flew up to Washington state on Friday, drove it home Saturday, installed the butcher’s specialized tools on Sunday, and were back at work with a new truck on Monday.

“The only thing I don’t like about this truck is the color. Blue! It shows every bit of dirt,” said the butcher.

The butcher’s been doing same kind of work since he was 14 years old. And, as long as he’s been able to drive, has had a white truck. Eight of them in total: seven white trucks and now a blue one. He could have held out for another week while they scoured the country for a white truck that met his specifications, but they didn’t. They found something that did what they needed, and they got back to work.

Business is like that. Sometimes it is almost impossible to go from 99% right to 100% perfect, and most of the time, that’s ok. The excellent and finished is better than the perfect and never done.

Ranch butchering is a messy, smelly job. But so is your business. You can learn a lot from a bacon maker.