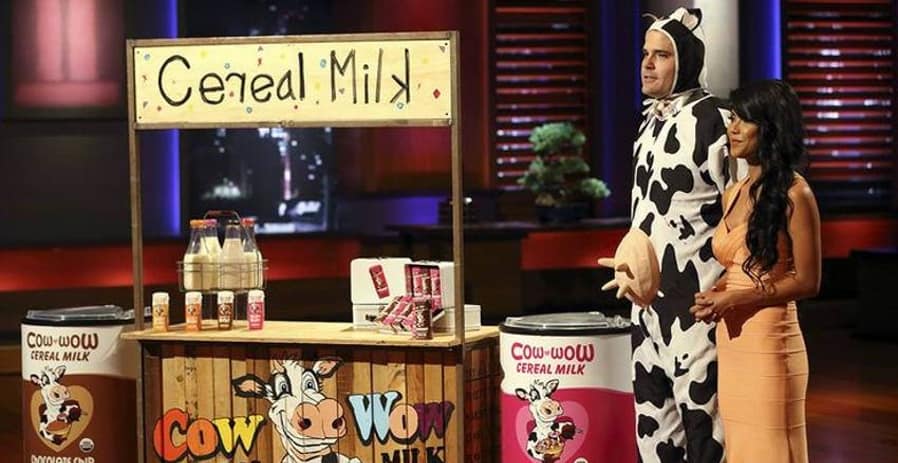 Chris Pouy and his business Cow Wow Cereal Milk have tackled the unimaginable: they want to make milk fun!

When Chris was a little boy he refused to drink his milk until his grandmother started soaking cereal in milk, straining it, and giving Chris the resulting flavored milk to drink. Today, Chris has turned this idea into a thriving business selling boxed Cow Wow cereal milk across the country.

I recently had the opportunity to speak with Chris about his love/hate relationship with milk. My questions are below in bold.

Hi Chris. Thanks for talking to us today. What’s your backstory?

I was a copywriter in the advertising business for about 10 years. I worked on several other beverage brands like Vitamin Water, Pepsi and Gatorade. After awhile I realized that I had no skin in the game and if I was ever going to get any satisfaction out of life I had to do something I could call my own. So I quit the business and now I make milk.

What is Cow Wow?

Cow Wow is organic, all-natural, low fat milk that tastes like what’s left over after you eat a bowl of your favorite cereals. Except instead of wasting 10 minutes of your life staring at a bowl waiting for the best part to manifest, it comes in a convenient, portable, package that’s perfect for people on the go. Right now it comes in 3 flavors; Cinny Minny, Fruity Trudy and Chocolate Chip Cathy. Basically it’s heaven on earth.

Where did the idea for Cow Wow come from?

When I was a kid my very Russian grandmother came to visit the US and in my household if you didn’t drink your milk, eat your eggs and finish your bread you lost a finger. She noticed that I inhaled my milk after eating Fruit Loops, but never drank my glass of regular milk with dinner. So the next morning she poured an entire box of cereal in a giant bowl, emptied a gallon of milk into it and started stirring all while dancing around the kitchen. I remember thinking to myself “How the heck am I going to finish that entire bowl of cereal,” but she just smiled, strained the milk back into the jug and went about her morning like nothing was going on. Later that night she poured me a glass of her moogic milk from the cereal experiment and I chugged the whole thing before even picking up my fork. She smiled at me and said in broken Engrish, “You drink milk vit dinner now eh Chirsofer?”

My dad was a pilot and he had frequent layovers at the Honolulu Hilton. He always told me about the old people in wheelchairs who stared out at the ocean through a giant glass window in the lobby. He said “Son…don’t ever be one of those people who looks at the ocean. Swim in it.” Well my father passed away 5 years ago and left me with great wisdom and a modest retirement fund. I could either wait 20 years for that fund to turn into just enough money to drive a camper across the country until I died or I could make 9000 cases of flavored milk. I’m pretty sure this wan’t what he meant when he said go swim in the ocean, but yeah…I guess I’m swimming in milk.

Where do you see it in five years?

In a perfect world, I see Cow Wow as the greatest flavored milk ever created. The Ben & Jerry’s of dairy with flavors straight out of Charlie and the Chocolate Factory. Every college campus would use Cow Wow in their drinking fountains instead of water. And Jessica Alba ditches Vita Coco and becomes our spokesperson. We would be giving Nestle and Hershey’s a run for their money and then they’d give us 100 million dollars to disappear. Which we would. Happily. On a boat called the “SEA COW” with a manatee instead of the cow as our logo. Technically they’re the cows of the sea. 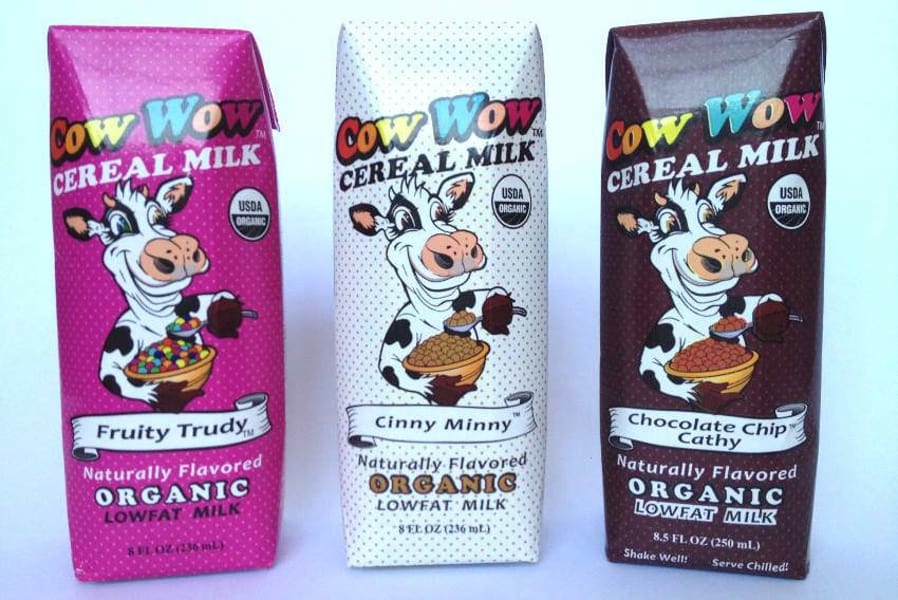 I would’ve made Chocolate Chip Cathy first instead of Fruity Trudy. Apparently strawberry is the 4th best selling flavor out of all the milks and chocolate is the best. That information would have been useful to me yesterday.

Well today I’ve spent most of my time answering this email, but honestly I really enjoy it. I’m a writer by trade so I like answering people’s questions and anytime I can help inspire people to do what they truly love is well worth it to me. Sometimes I log onto our info@cowwownow.com email and interact directly with consumers to see how they’re doing. Typically I try to balance my day with the fun creative stuff like coming up with ideas for marketing stunts and the not fun stuff like making sales calls. It’s mostly about trying to figure what the best way to sell the product is, making adjustments and executing.

What’s one trend that really excites you?

I like the whole wacky food thing happening like cronuts, ramen burgers, and chicken and waffle flavored potato chips. I’m a foodie at heart and there are no rules when you start taking things that aren’t typically meant to be together and creating something totally new and unique. That is the holy grail in my opinion.

I was a barback in Hollywood when I first moved to Los Angeles. Which sucked even more because I wasn’t trying to be an actor, I was just trying to survive. One day the drain in the bathroom was stopped up and poop was coming out of the floor. The manager made me clean it, which I did…against my will. I remember thinking to myself “Don’t quit yet. Just get through this night and you can quit when you find another job.” Needless to say I stuck with it and the lesson I learned I still carry with me today. Do not give in no matter what. There will be dark days, and days that are even darker than those days, and days where you think the sun has melted and the earth is going to implode, but stay the course and eventually you will find your way. And you will be better because you suffered.

As an entrepreneur, what is the one thing you do over and over and recommend everyone else do?

I visualize whirled peas. When I was a kid, I stunk at baseball and my coach said imagine hitting a home run. Imagine the pressure of the at bat. Imagine your smooth swing. Imagine the way you will feel rounding the bases. I popped out to the pitcher, but eventually I got it and I’ll be damned if I didn’t hit a ground rule double at some point. You have to constantly remind yourself that everything is going to be okay and never for one second doubt that it’s going to work. Ever.

I’ve had so many it’s hard to choose, but I think the biggest failure I had was trying to force it. Initially I tried to make Cow Wow for young kids because I felt they needed a healthy option to juice and soda that still tasted good. That means I had to win over moms too which is almost impossible especially when sugar is involved. Jimmy Kimmel mentioned us in his monologue, Cosmo magazine said we were a cool new product for the summer and Buzzfeed ranked us as one of the 26 greatest reasons to be alive. Then we got into some colleges and sales really took off. Our demo wasn’t kids, it was man children. All the signs were there but it took me a long time to be honest about what our product was and who it was for. Always keep your eyes open and be ready to pivot if the opportunity reveals itself.

What is one business idea that you¹re willing to give away to our readers?

I’ve always wanted to open a dive bar called “Misteaks.” We’d serve really crappy beer like Milwaukee’s Best, PBR and Schlitz on tap, but the steaks would be out of this world. Please don’ steal it.

I think I would force society to unplug once work is over. The French just passed a law that says people don’t have to answer work calls after 6 pm. In fact they don’t have to work period. They are required to go to the cafe, order a glass of wine and people watch. Okay maybe not that last part, but sometimes people get so wrapped up in work and determined to succeed that they forget to enjoy life. To me it’s always about balance. If you put your head down and don’t enjoy the ride, if and when you finally close the deal you’ll wonder where the last 10 years of your life went.

Lakers.com, my Yahoo fantasy football homepage and Dictionary.com. You can never know too many words.

“From Good To Great” by Jim Collins. It really gives you a clear path of how to get to the next level and is simple to read. I might also read “The Book of 5 Rings” by the swordsman Miyamoto Mushashi circa 1645. It’s a book about the philosophy of combat and can definitely be applied to every day life.

I was at a birthday party this weekend and wrestled my girlfriend in one of those giant sumo fat suits. We both fell into the pool and floated around for 10 minutes. Laughter ensued.

My Dad. Without him I wouldn’t be answering any of these questions.

The person who had the most influence on me in my life is Rick Sittig (He invented the Energizer Bunny.) He’s the Creative Director at an agency called Secret Weapon Marketing and gave me my first job in advertising. They work on Jack in the Box, among other things, and that was the best 4 years of my life. He basically taught me everything I know about writing and gave me an opportunity to truly express myself and make fun of people.

Is there anything I didn’t ask that I should have?

Three can keep a secret if two of them are dead. -Ben Franklin

How can we connect with you on the interwebs?

Thanks Chris for taking the time to speak with us today!

WhiteBIT CEO Volodymyr Nosov on How His Company Helps Ukraine