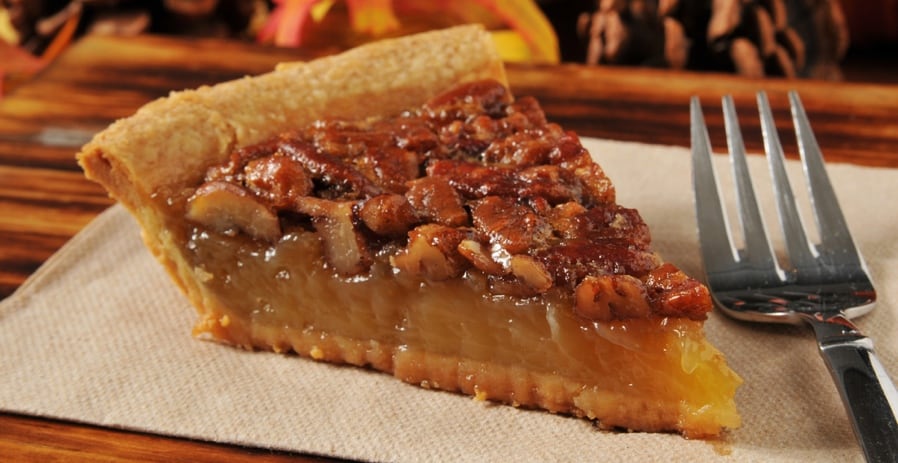 Nothing says Thanksgiving quite like a pecan pie. Sure, the turkey, stuffing, mashed potatoes and cranberry sauce are important, and apple and pumpkin pies are more widely made and eat, but pecan pie, with its sweet nuttiness, is the perfect Thanksgiving dessert.
enter link description here
The pie is overly sweet, contains both a crunch, and gooey center, and contains nearly as many calories per slice as an entire plate mounded high with turkey and all the fixings. It’s an over-the-top end, to an over-the-top meal.

In other words, it’s heaven.

Consisting almost entirely of one ingredient (and I don’t mean the pecans), the pie seems like it was almost made to be marketed as candy with a crust. And the truth is, that’s not too far from the truth.

Because for whatever else it is, pecan pie is also a content marketing masterpiece.

And I’m going to prove it to you.

To really understand how pecan pie came about, we have to go back to the beginning. Not to to the first Thanksgiving, when the Pilgrims in their funny hats and buckled shoes shared in the bounty of the friendly American indians, but back to the early days of the sugar refining business.

Americans have always loved their sweets, but they weren’t always cheap.

Historically, the primary sweetener in North America was maple syrup, the sap of the sugar maple tree. Native Americans had long been collecting and consuming maple syrup. As much as 12% of the diet of some northeastern tribes was what they called “tree water.” The Native Americans caught the sap from the tree in hollowed or carved-out logs and cooked it by dropping hot rocks into the collected sap. Early European settlers learned from the natives how to collect the sap, and improved on the refining process. By 1800, Americans consumed 18 pounds of sugar per year, the bulk of which was maple syrup and its derivatives.

Refined cane sugar and molasses were also available domestically, but the fact that they were produced from sugar cane, which only grew in the subtropical latitudes of the Caribbean Sea, and had be processed on-site, made it more expensive to import during the age of the sailing ship.

By the late 1800s, though, the status of maple syrup and cane sugar had switched. By this time, lumber harvesting has decimated the trees, and less than 20% of the northeastern United States was still forested. The steam ship dramatically reduced transportation costs, and processed cane sugar because proportionately cheaper and more widely available. Effectively by the end of the century, cane sugar had become the commodity sweetener and maple syrup had become the luxury item, something only to be used once a week on a pile of steaming pancakes.

By 1900, the average American consumed, 90 pounds of sugar, primarily from cane sugar.

With this century-long rapid increase in demand for sweets, other innovations followed.

Just before the American Civil War, a process was created to extract corn starch from the corn kernel. These starches were primarily used in the starching of clothing in the laundry business, but immediately following the war, in 1866, it was discovered that dextrose sugar could be further extracted from the corn starch. Within about a decade, the process was more or less perfected, and corn sugar, also known as corn syrup, became available for purchase.

Although corn syrup was easy to make, and in some areas of the country very inexpensive, it was sold in large barrels to retailers who’d refill customers’ jugs with a ladle.

The messy process wasn’t ideal, and in 1902, the Corn Products Refining Co. of New York and Chicago, created and began selling Karo Syrup, the first corn syrup packaged in a small container specifically for use at home. 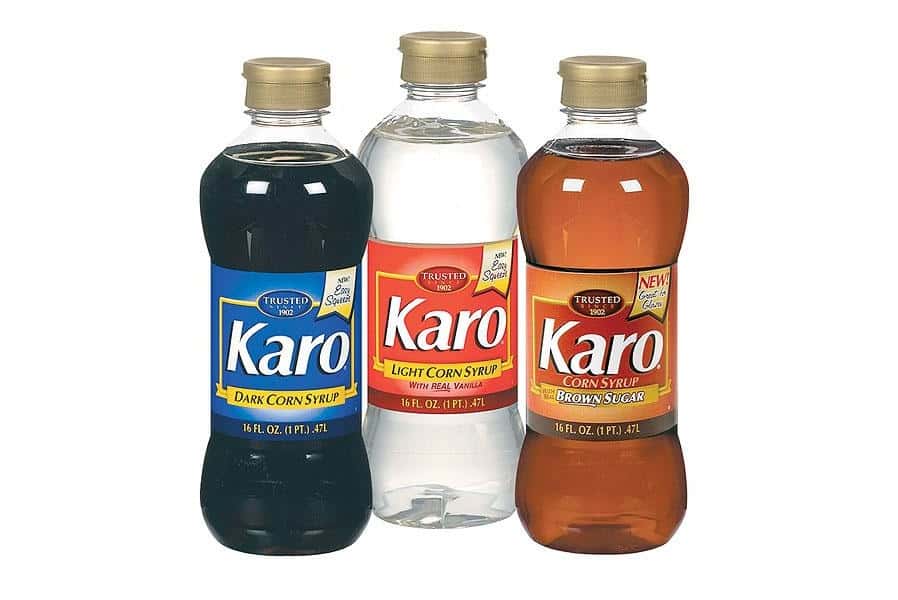 So what’s all this have to do with the pecan pie? Although most people assume that the pie has it’s origins in the colonial period, because, after all, how difficult could it have been to collect the pecans that fall off the trees and ripen in the fall, and then mix them into a molasses or maple syrup sauce and bake it, it turns out that no written recipes can be found for the pecan pie that date to before 1930. And to understand why, we have to look at how corn syrup, and especially Karo Syrup was marketed in the early 20th century. 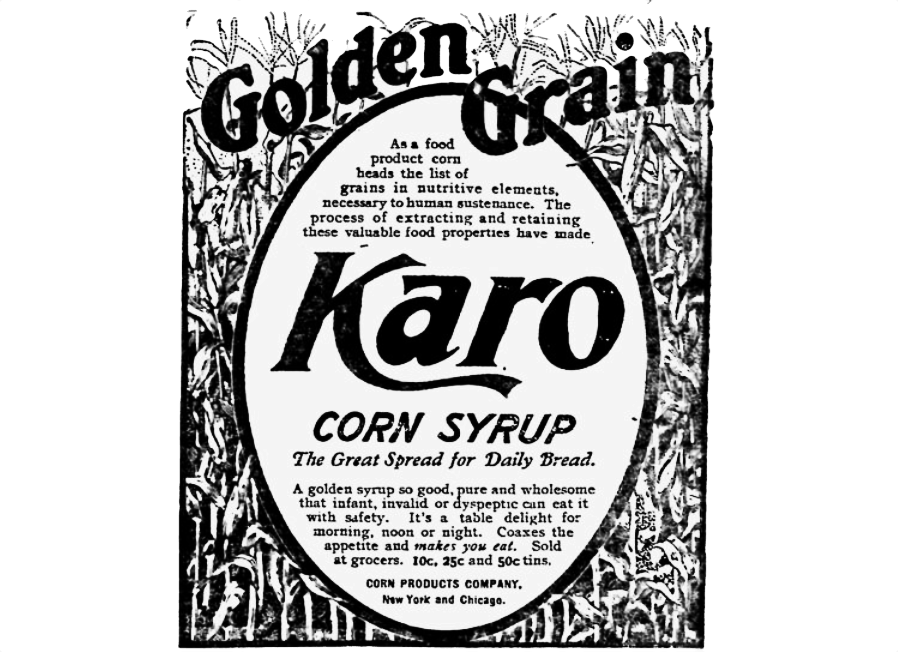 At first, Karo Syrup was sold as a wonder food. A 1903 advertisement in The Pittsburgh Press reads:

“As a food product, corn heads the list of grains in nutritive elements necessary to human sustenance. The process of extracting and retaining these valuable food properties have made KARO CORN SYRUP “The Great Spread for Daily Bread.” A golden syrup so good, pure and wholesome that infant, invalid or dyspeptic can eat it with safety. It’s a table delight for morning, noon or night. Coaxes the appetite and makes you eat. Sold at grocers, 10c, 25c and 50c tins.”

A dyspeptic person is one who is suffering from indigestion, and consequent irritability and depression. So, in other words, Karo Syrup was originally advertised as a cure for depression.

In the early 20th century, there were no federal laws that regulated the contents and sale of food and pharmaceuticals. Instead, a patchwork of various state laws provided varying degrees of protection against unethical sales practices. But, in 1906, under President Theodore Roosevelt, the Food and Drug Act was signed into law.

The Act prohibited, under penalty of seizure of goods, the interstate transport of food which had been “adulterated or misbranded.” According to the Act, adulterated referred to the addition of fillers of reduced “quality or strength,” coloring to conceal “damage or inferiority,” formulation with additives “injurious to health,” or the use of “filthy, decomposed, or putrid” substances. Another law in 1912 added “false and fraudulent” claims of “curative or therapeutic effect” to the Act’s definition of “misbranded.”

Overnight, the makers of Karo Syrup could not longer market and sell their syrup as a wonder elixir designed to cure hunger and end depression. A new strategy had to be developed.

As part of this campaign, the first Karo Cook Book was published. Compiled and written by Emma Churchman Hewitt, former associate editor of the Ladies Home Journal, this 50 page booklet contained more than 150 recipes, most of which contained Karo Syrup, including asparagus soup. The book even cautioned that “to prevent Karo Syrup from burning, drop in three of four stone marbles. The heat will keep these constantly on the move and will not only prevent the burning but will do most of the stirring.”

Surprisingly, pecan pie was not one of the recipes compiled in the first Karo Cook Book. For that, we have to wait until 1930, when according to ACH Food Companies, Inc., the current owner of Karo Syrup, “the wife of a corporate sales executive discovered a new use for corn syrup. A mixture of corn syrup, sugar, eggs, vanilla and pecans baked in a pie shell produced the now classic Pecan Pie. Down South, today, that same recipe continues to be called Karo Pie.”

At the time, most newspapers published weekly “favorite recipe” columns, where female readers would send in their favorite recipes for publication, and other readers would clip them and add them to their recipe books. In a sense, these newspaper columns were the blogs and Facebook of the early 20th century.

Almost overnight, the pecan pie began to dominate these newspaper columns, especially in the weeks leading up to Thanksgiving and Christmas.

This “grassroots advertising campaign” must have worked, because Karo began incorporating the recipe advice columns directly into their market budget in the 1940s.

A sponsored content column in the Big Spring Daily Herald, published in 1941, called “Surprise the Folks with Karo Pecan Pie Tonight…it’s wonderful!” described how to bake this “Texas favorite” with “1 cup of Karo (Blue Label).”

Another paid placement in 1942 described the pecan pie this way: “I have nibbled at the Utterly Deadly Southern Pecan Pie, and have served it to those in whose welfare I took no interest, but being included to plumpness, and having as well a desire to see out my days on earth, I have never eaten a full portion.”

By the late 1940s, when the many of the people who’d remember the 19th had died off, Karo was no longer a sold as a therapeutic syrup, but instead the inexpensive and nutrition-less corn syrup was marketed as the basis for a decadent desert reminiscent of the antebellum pre-Civil War South.

Following World War Two, in 1949, Karo Syrup published a new cookbook, called Karo Kookery, which prominently featured the pecan pie as delicacy of the American diet. Karo also began printing the recipe for the pie directly on the bottle of syrup.

Spurred in large part by Walt Disney and television in the 1950s, America began to look back, romantically, at their past. And there was no historical figure that Walt Disney, and America, loved more than Abraham Lincoln.

Abraham Lincoln was America’s first President to be assassinated in office, having been tragically shot in Ford’s Theater in Washington D.C. in April 1865, while watching a play from his private box. Over the years, his story left an impression on countless people including Walt Disney. Walt Disney admired Lincoln greatly, so much so that when Walt was asked to develop attractions for the New York World’s Fair in 1964, he created the first animatronic Lincoln to deliver inspiring words to the throngs of people who came to see it. When the fair ended it’s run, Lincoln was taken to Disneyland and set up in the Opera House to continue his speech for ever.

In the buildup to the hundredth anniversary of his death in 1965, America could be said to have Lincoln-mania. It wasn’t just television and Disneyland that cashed in on this: dozens of new biographies were written, as were more than a few cookbooks of the former President’s favorite dishes.

More than one cookbook relayed that Lincoln’s favorite dessert was a pecan pie that he supposedly ordered, by wagon-load, from The Excelsior Pie and Cake Bakery in Washington, D.C. The included recipes almost always consisted of the standard Karo Syrup recipe, with or without a little include molasses for a some added historical character.

Let me remind you, again, that Abraham Lincoln was assassinated in 1865, and that the process for extracting dextrose from corn starch wasn’t invented until in 1866 — one year after his death, and that there are no written recipes for pecan pie dating to before 1930.

Today, pecan pie is a traditional pie enjoyed by at least 25% of the population of the United States on Thanksgiving. It is, truth be told, my favorite pie. But there’s nothing traditional about it, unless your definition of traditional only goes back two, or maybe three, generations and is based on the content marketing of one specific company.

So, what can we learn from Karo Syrup’s content marketing? I see six lessons that you can use.