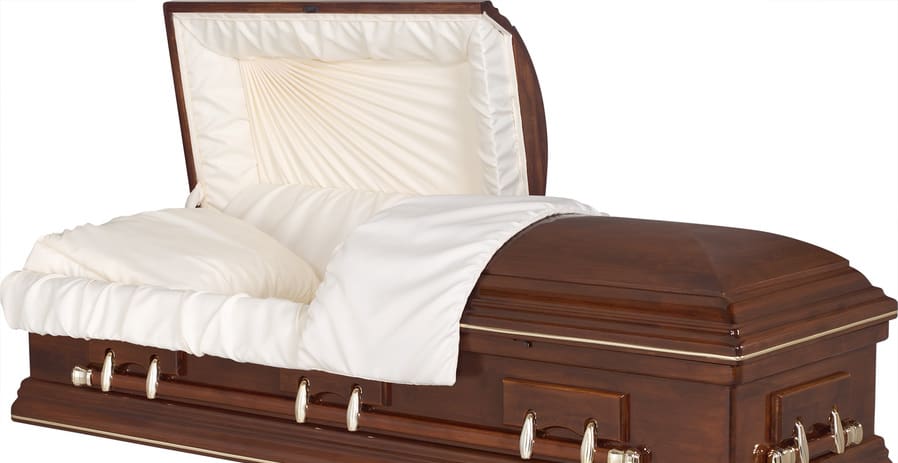 In 2005, Malamas bet on caskets to become the next American industry felled by China. The field’s Big Three companies—Hillenbrand, Matthews International, and Aurora Casket—controlled 70 percent of the market. Hillenbrand, more commonly referred to by its subsidiary’s name, Batesville, and Matthews are publicly traded, with a combined market cap of $3.8 billion. Aurora was acquired by Kohlberg, a private equity firm in Mt. Kisco, N.Y., in 2012 for an undisclosed sum. Death is expensive: The average funeral costs $6,460, according to the National Funeral Directors Association. A full quarter of that price is the casket. Hillenbrand, Matthews, and Aurora declined to comment for this story, as did the NFDA.

China Daily, an English-language newspaper, hasn’t been able to resist the puns—“China Seeks to Bury the Competition” and “A Matter of Grave Import.” Dan Isard, president of Foresight Cos., an Arizona-based consultant to funeral homes and cemeteries, predicted early on to the Cincinnati Business Courier that by 2025 at least 75 percent of the caskets buried in the U.S. would be produced in China or other countries with cheap labor.

Malamas named his new company American Casket Enterprises, later changed to ACE Funeral Products. He kept overhead to a minimum. He’s never had U.S. employees, and he still manages his business with a laptop, iPad, and toll-free hotline that routes directly to his smartphone. Early business was brisk. Revenue in his first quarter of operations, in 2005, was $60,000; it shot to $750,000 the next fiscal year and $3 million in 2008. Malamas still cackles with delight when he remembers those heady times: “We were taking out a showroom every 10 days. Ha!”