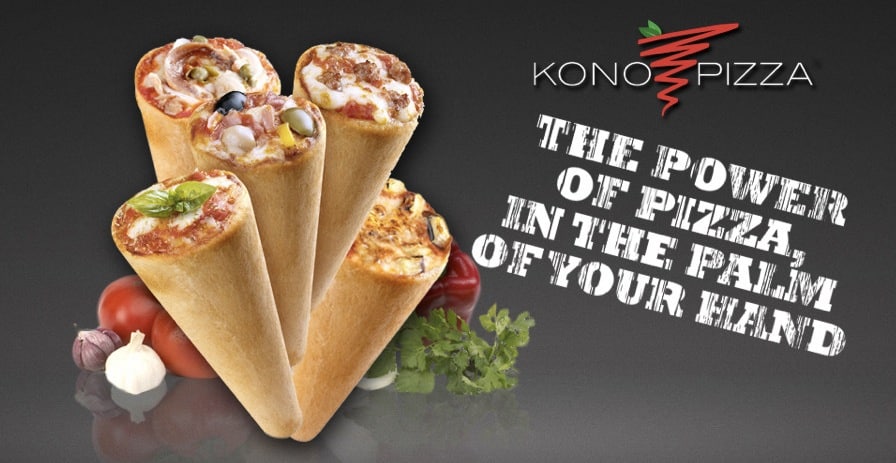 There is a unique concept that has recently popped up into the fast-casual pizza segment.

This isn’t the typical pizza that you’re used to… traditional triangle slices or squares. This pizza comes in a cone. The pizza-in-a-cone concept became popular and Europe and has now migrated to the U.S. And it’s now entered the pizza franchise market.

“The Original” Kono Pizza was first established in Edison, N.J. in 2013 by David Ragosa and Carlo Ruggiero. What started as a traditional brick-and-mortar pizza place has since evolved into a franchise that includes three new prototype models — a kiosk, mobile cart and in-line store — which gives franchisees an added level of variety and flexibility.

The country’s first kiosk opened in The Florida Mall in Orlando by James Saliba, who secured rights to expand Kono Pizza in the state of Florida. A second brick-and-mortar location, owned by husband and wife franchisees Micah and Kelly Powers, opened last month in Le Mars, Iowa. And Kono Pizza announced that five mobile carts will be coming to Philadelphia and South Jersey, the first of which will roll out in July.

RELATED: BEST PIZZA FRANCHISES TO OWN

Kono Pizza is served in a cone filled with fresh, quality ingredients, with its dough and sauce imported directly from Italy. It offers consumers a healthier, on-the-go alternative to one of their favorite foods. Kono Pizza features a thinner crust and low-moisture cheese, bringing the calorie total to just 250-280 each, compared to 450 calories in an average traditional slice of pizza.

There are currently 130 Kono Pizza locations operating in 20 countries, with 15 additional locations in various stages of development across the United States.

For more information about this franchise, visit “The Original” Kono Pizza.