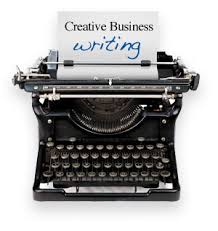 Business Writing Vs. Creative Writing – What You Need To Know

Those who think that business writing and creative writing are the same thing, are sorely mistaken. There is a clear difference between business writing (attempting to make an audience aware of and potentially purchase your product), and writing creatively (for the benefit of someone’s imagination or enjoyment).

So what are the differences?

To conjure up an image of business writing, just think about the last newspaper ad, magazine cover, Super Bowl commercial or even work proposal you looked at. All these different mediums are great examples of writing for business. Their proposal is hopefully enticing, their benefits are clearly stated and the creator intends that it will compel the viewer to say yes to something or make a purchase.

Corporate reports and finely developed marketing material pieces are other good examples of the methods of business writing.  It is characterized by the use of formal wording and written in a clear and concise manner.  This ensures there will be little room for reader interpretation. The writer only wants to provide facts. This formal tone allows the writer to separate themselves from the content or product allowing it to sell itself. Of course a cordial tone is still necessary to build trust and not alienate the reader.

Business writing pieces relay information as a matter-of-fact.  Using a minimalist approach, the writer states what is necessary and little else.  Often seen as one-dimensional, business writing dictates information and does not take into account the reader’s experience level. That is not the goal. The goal is to convince a reader to do something using the following dialogue examples:

Creative writing is the total opposite of business prose.  Creative writers often reveal bits and pieces of information to build suspense and intrigue.  Their goal is not to sell anything but rather to take a person on a journey far away from everything else.

Instead of being one-dimensional, it offers a two-way relationship between the writer and their audience.  Even though the reader is not actually sitting by the author’s side, the writer has the reader’s thoughts and emotions in mind when putting words to paper.

Creative writing is also considered inclusive. It will envelop the reader instead of keeping them at arms-length to state facts. . The use of the writer’s vast lexicon is also a prominent characteristic of creative writing.  Using words both familiar and foreign, the writer is able to be more descriptive give the reader a richer experience.

Clearly, business writing and creative writing are not the same thing. Business writing is fact based, predictable and usually includes an ask or action at the end.  Creative writing, instead, offers writers the ability to use an infinite number of avenues to take their writers on a journey to literally anywhere.

Keep in mind from time to time, the two styles may overlap. The most notable example is Ernest Hemingway.  Highly regarded as one of the greatest writers of the twentieth century, He was able to whisks his readers away on a grand journey while keeping the word and sentence count to a marked brevity.  This hybrid style of writing demands a great deal of forethought and clarity to from the author so as to not rob the reader of the experience or details.

Of course, not just anyone can be a Hemingway. Most writers today, depending upon their occupation will choose between business and creative styles. Knowing the difference between the two styles can be an important distinction. It is a difference that any advanced writer should keep in mind when presenting their thoughts and ideas to their readers.