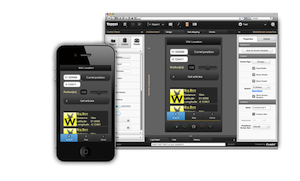 The following is a guest post by Michael Paffmann.

Below is a list of the top 7 app building platforms that are great for both individuals with a basic developer background and those that are trying to create their first app. These platforms can be a useful tool for small business owners and entrepreneurs that are trying to enter the mobile app space.

AppInstitute offers a DIY app builder solution that allows users to create their own apps for iOS and Android. The app maker is a simple drag-and-drop platform with templates geared towards various small businesses – like restaurants, hair salons and driving instructors. The aim is to allow anyone to build an app without writing a single line of code. Apps built using AppInstitute offer functions like e-commerce, push notifications, and loyalty cards.

Buzztouch: Users develop the app in Buzztouch, then use a compiler and submit the app on their own to iTunes and Google Play. For that, Buzztouch lets users add content; images; contact information; streaming video and audio; RSS; quizzes; location maps; Excel and Word docs; PDFs; and shares for email, Facebook, and Twitter.

PhoneGap: One of the most notable features is its â€œwrite onceâ€ standard, which allows you to develop an application once and not have to worry about tweaking it for different platforms. PhoneGap gives you an app that works in Windows Phone, iOS, Android, BlackBerry, and SymbianOS.

Branded Business Apps: Has a five-step app development process, which allows for the launch of iPhone, iPad and Android apps in less than 48 hours. The platform was created largely for service industries â€” restaurants, churches, health clubs and hotels, among others â€” functionality is limited to a basic set of almost 40 features.

Titanium: Offered by Appcelerator, Titanium is a strong application development environment that doesnâ€™t require any hardcore programming experience. Instead, developers can make apps with HTML, CSS, and JavaScript.

EachScape: Takes a unique building-block approach, which allows it to avoid the use of templates most often responsible for the generic interface of inexpensive apps. EachScape is a drag and drop environment where the user selects â€˜blocksâ€™ or components, integrates their content, customizes and is then able to generate apps for iOS, Android and HTML5.

The AppBuilder: Created by JamPot Technologies, this is a service that offers application templates that help small businesses create native applications for iOS and Android. You can get as simple or as custom as you want. The service automatically submits your application to the iTunes App Store, Google Play market or Windows Phone Marketplace.

AppExpress: A do-it-yourself app builder for small and midsize businesses, this platform supports the development of applications for appointment scheduling, handling invoicing and accepting payments, messaging and marketing with coupons. The service allows for creation of apps that work on either iOS or Android. It also includes an option for creating a one-page mobile-optimized Web site.