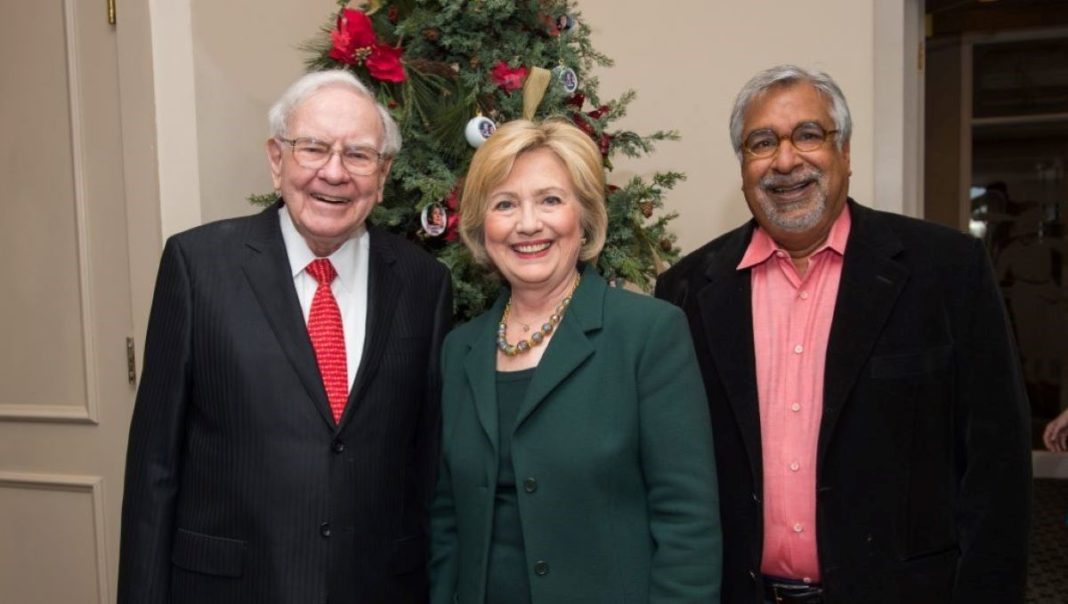 Businessman and investor Vinod Gupta lives by a seemingly simple philosophy: learn, earn, and return. This philosophy has enabled him to donate more than $50 million toward various philanthropic endeavors.

As the classic expression goes, such a philosophy is easier said than done. However, Gupta has managed to achieve all three points with aplomb. By devoting himself to his studies and avidly pursuing his professional interests, he has created a life for himself in which he has the ability as well as the commitment to pay it forward. For example, one of his greatest accomplishments is the Vinod Gupta Charitable Foundation, which supports multiple philanthropic endeavors.

Gupta was born and grew up in Rampur Maniharan, a small Indian village where there was virtually no access to modern conveniences. There were no telephones, electricity, or cars. The village even lacked roads and running water.

Though lacking these comforts, the village did have a local school. Beginning when Gupta was young, his father, a physician, spent time personally instructing Gupta in subjects such as mathematics and biology. Additionally, he hired tutors to ensure the boy was on a path that had fruitful opportunities.

Upon graduating from high school, Gupta continued his education at the Indian Institute of Technology in Kharagpur. There he studied agricultural engineering. While attending IIT he met visiting professor Dr. Bill Splinter. Therefore, after receiving his Bachelor of Technology degree, he made the decision to continue his education at the school Dr. Splinter was from. Accordingly, he applied to the University of Nebraska in the United States.

He entered that university’s master’s degree program on a scholarship. So with only some pocket change and a single suitcase, Gupta moved halfway around the world.

After receiving his master’s degree in agricultural engineering, he decided to take all of the technical knowledge he had acquired and find a way to apply it in practical ways. Therefore, he earned an MBA from the University of Nebraska as well.

He showed his business acumen early on in his career, when his company requested he compile a list of mobile home dealers in the United States. However, he balked at proceeding with the task as directed, which was to pull from insufficient sources and create a list that would inevitably be incomplete and soon obsolete. Instead, he used the company’s resources to order every single Yellow Pages directory available in the United States.

His plan was to create a new and comprehensive list himself. Although his company was not happy with the idea of Gupta using company time to do so, they allowed him to move the books to his garage and proceed with the task on his own. This he did, with only a small personal loan and a lot of dedication.

Once he completed the project, he offered The Commodore Corporation the chance to purchase exclusive rights to the list. He made clear that otherwise he would proceed with selling it to their competitors.

However, company managers did not comprehend the value of the resource he was offering to them, and they declined the offer. Within three weeks, Gupta had an offer of more than $35,000 for his list.

Gupta made $18,000 profit in his first year, so he soon quit his day job to found his own company, which he called Business Research Services. Realizing he had tapped into an under-served niche market, the company began meticulously assembling lists for other industries.

After a little more than a decade of persistence and hard work they managed to have compounded the entire Yellow Pages in their databases.

The rapid growth of the Internet brought with it the necessity for new methods of dispersing and acquiring information and propelled the company into the global market. Accordingly, the name changed two more times, first to infoUSA and then to infoGroup.

Gupta spent 35 years building the company from a small project in his garage to a global business with revenues of $750 million that had acquired more than 45 companies. At this point, Gupta decided he was ready to pursue new projects. Specifically, he wanted to devote more time and energy to his charitable interests.

Having successfully “learned” in life and “earned” in his career, Gupta has now entered the “return” phase of his life. He thus now pays forward the opportunities that he benefited from.

This phase is informed by his deep understanding of both the developing world that was his Indian upbringing and the high-income industrial country where he has made a home and career for himself. He therefore recognizes the importance education plays in opportunity.

Accordingly, he focuses much of his charitable contributions toward promoting accessibility of education. He also works to create and improve programs that were previously unavailable.

On July 4,1997, the Vinod Gupta Charitable Foundation (VGCF) began in Delhi under the Societies Registration Act XXI of 1860. It is well worth noting that this date was also Mr. Gupta’s birthday, a small indication of the importance to him of this momentous occasion.

The overarching aim of the foundation is to empower women and girls of marginalized groups through sustainable initiatives in the field of education, enabling them to be economically and socially secure. It has also made large contributions to education as a whole. Additionally, the foundation contributes to the preservation of India’s wildlife.

A Life of Philanthropy

One of Gupta’s earliest contributions was $2 million to the Indian Institute of Technology Kharagpur for the founding of the Vinod Gupta School of Management. The school is based on the concept of the Sloan School of Management at MIT in the United States, and it became the IIT’s first business school.

This initiative came about largely because Gupta recognized how vital an MBA was to his own success. He therefore wanted his Indian alma mater to have a program for developing business leaders in India. Moreover, he wanted those graduates to have strong technical backgrounds.

In addition to offering a traditional MBA via the two year full-time program, the Vinod Gupta School of Management also implemented a three-year program intended for working executives, aptly titled an Executive Master of Business or EMBA.

Gupta and his foundation were also instrumental in establishing IIT’s first and only law school, the Rajiv Gandhi School of Intellectual Property Law. This was also the first law school in India with a primary focus on intellectual property. It is now ranked as the second-best law school in India. This school produces graduates who are productive and therefore themselves make significant contributions to India’s wealth.

In addition to its charitable efforts toward educational entities with which he had been associated, VGCF also contributed to the establishment of the Dr. Giri Lal Gupta School for Public Health and the Dr. Shanker Dayal Sharma Institute of Democracy at the University of Lucknow in Uttar Pradesh.

Gupta says he feels indebted to the teachers of Rampur Maniharan for giving him and his peers an exceptional education while only making $40 per month. For this reason, he established the Shrimati Ram Rati Women’s Polytechnic in his boyhood village. The school was later renamed the Ramrati Institute of Technology.

It now encompasses 25 acres of land that are home to 20 laboratories, a 300-seat auditorium, a 7-acre sports complex, and a library with more than 20,000 books. Within the schools themselves, teachers not only educate students, but also instill in them an enthusiasm for learning.

Signifying the extraordinary accomplishment that is the complex, President Bill Clinton traveled to Rampur Maniharan to lay the foundation stone for the William Jefferson Clinton Science and Technology Center.

Within the Ramrati Educational Complex, the Vinod Gupta Charitable Foundation provides various facilities to girls. For example, girls have access to free lunches, free bicycles, and a 50% discount on their admission fee. Moreover, there are no fees for admittance to the Hillary Clinton Nursing School and lower kindergarten.

However, it is at the Hillary Clinton Women’s Center that the foundation has been able to put to put into practice its core initiative of providing quality education and empowerment to women in rural India.

To this end, the center holds regular classes in skill development in a variety of subjects. These include handicrafts such as pottery and embroidery, fashion design, computer skills, cooking, and legal rights. All of these programs operate with the intention of empowering women to become self-reliant and independent.

In training the women of Rampur Maniharan and nearby villages in these useful and practical skills, the center opens the doorway to a multitude of opportunities that were previously unavailable to them.

Of India’s potential, Gupta has said, “All of us who have been successful in America have done so because the United States promotes individual entrepreneurship and freedom. I believe similar success stories are waiting to unfold in India.”

Supporting Education in the US

In India and at the Indian Institute of Technology, Gupta developed his passion for learning and education. However, it was in the United States and at the University of Nebraska where he found success and a home he chose for himself. He has not forgotten this parallel in his philanthropic efforts.

Accordingly, he donated $2 million to the University of Nebraska to establish a curriculum for small business management so others can better prepare for the trials that come with starting one’s own company. He also established a scholarship fund with a donation of $500,000. This is intended for minority students who want to enter the school’s science or engineering schools.

Having traveled to the United States with next to nothing and only a scholarship to get him started, Gupta wants to provide that cushion to others in similar circumstances. This is just one of the many ways Gupta is returning to his communities that which he has received.

Without a doubt, Gupta is passionate about promoting education. Additionally, Gupta and the VGCF have also made significant contributions toward wildlife conservation. He is aware of the vast importance nature and wild animals play in the balance of the Earth’s ecosystem. Therefore, Gupta has tasked himself with contributing to wildlife conservation in India. Specifically, he has made contributions to the Ranthambore Tiger Reserve through the foundation.

These contributions are aimed at protecting wildlife from harm caused by poaching and climate change. In addition to monetary contributions, the VGCF has donated jeeps, motorcycles, buses, GPS systems, computers, laptops, binoculars, cameras, night vision devices, LED lights, and apparel to the rangers working there. Moreover, the foundation has contributed toward the construction of large water reservoirs, toilets, and staff quarters.

Vinod Gupta’s journey through life has been nothing short of extraordinary. Starting with next to nothing, he arrived in the United States with no money to his name. He went from there to build a global business, beginning with a loan of only $100.

These accomplishments might have inflated another’s ego and inspired greed. However, Gupta measures his success in life not by his net worth but by his happiness.

He believes a person should learn as much as they can. As a result, they will earn what they deserve. They then have the responsibility to pay those monetary gains forward.

Gupta’s intention is to eventually give all of his money away to charitable causes. He says, “If we give it to our kids they are going to waste it. It’s best to invest it in our villages and our students. Eventually, they can do the same thing.”

Can the Keltner Channel Improve Your Forex Trades?