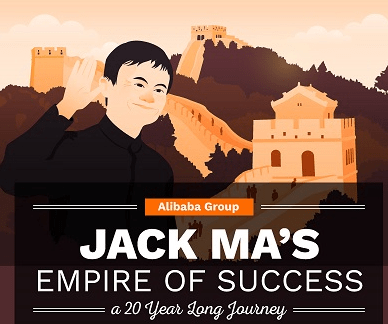 Who is Jack Ma?

Jack Ma is a Chinese business magnate and is the founder & executive chairman of the online giant, Alibaba Group. Hailing from a humble background, he represents a true rags to riches story and is an inspiration to millions across the globe. He was born in the early 1960’s in communist China. After college, he was rejected for dozens of jobs but little did the world know that Ma would go on to build the largest online portal in the world.

In 1999, Jack Ma together with 17 of his friends released their first marketplace, “Alibaba Online” from his flat with the goal of facilitating international trade for small and medium businesses based in China. After an initial struggle, Alibaba was able to secure investors and after stiff competition from e-commerce multinational, E-bay, in December 2001 the group achieved profitability. In November 2007, Alibaba was successfully listed on the Hong Kong stock exchange.

Today the company has around 70,000 brands and with over 180 million buyers making it larger than both Amazon and E-bay combined. Under Jack Ma’s leadership, the group has been improving its revenue year after year from ¥6.6 billion in 2010 to ¥101.1 billion in the first quarter of 2016. In 2014, the online giant broke all time records as the largest IPO till date in history after it priced its offering at $68 a share and post overallotment option combined income rose to $25 billion.

What Jack Ma has been able to achieve is incredible and been an inspiration to many other business minded individuals out there. It has been a proof that even in communist societies, entrepreneurs can succeed. And unlike most of the other successful Chinese entrepreneurs, Jack Ma never studied in the United States of America. And what’s even stunning about this man is that had no money, connections, and status whatsoever.

Back then the world looked nothing like it is today. In China, retail stores were rarely outside the big cities and transactions were only done face to face and in cash. As a result, Alibaba was faced with the uphill task of overcoming a century old tradition and showing buyers and sellers that the new virtual world could be trusted. That idea was revolutionary and ordinary people who didn’t have the means to do business back then were provided with the opportunity to. Results? The creation of millions of jobs both directly and indirectly for the Chinese people.

The company has grown and now has multiple subsidiaries with Taobao, AliExpress among the major ones. The company has over 46,288 workers on its payroll with more than three-quarters of them being on a full-time basis. To sustain its growth, the group has diversified its services and now boasts a multitude of sites each with different functions. Not only that but also the company is actively penetrating newer markets.

Humbleness of the Business Tycoon

Despite all the success, Jack Ma has never forgotten his roots. The company has been on the forefront in fostering the Chinese economy and improving the living standards of the people. Small businesses have been able to get loans with a favorable default rate of 0.9%. This has been helpful to young people aiming to operate startups. Mr. Ma attributes his success to his persistence and self-belief in the face of several adversities as well as treating rejections. Over the years, he considered even his smallest failures as the best opportunities to propel his business mind to new heights. “We keep fighting. We keep changing ourselves. We don’t complain,” he once said.