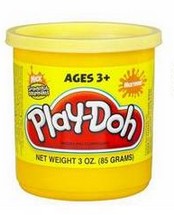 Back before it was Play-Doh, everyone’s favorite squishy clay was actually a wallpaper cleaner used to clean soot off of walls.

But when people switched from using coal burning furnaces to oil fueled ones in the ‘40s and ‘50s, demand for the product evaporated.

Kutol, a manufacturing company in Cincinnati, was watching their sales dwindle when the son of the company’s founder, Joe McVicker, started looking for ways to turn the business round.

His sister-in-law Kay Zufall suggested using the wallpaper cleaner as a child’s craft item, and McVicker was willing to try anything.

He formed a new division, Rainbow Crafts, and began selling the re-branded product as Play-Doh. Sales were okay, but then McVicker came up with a way to sell a whole lot more.

He contacted Captain Kangaroo (AKA Bob Keeshan) and offered him 2% of sales if the good Captain would feature Play-Doh on his show. He did.

More than two billion cans of Play-Doh have been sold since 1955.