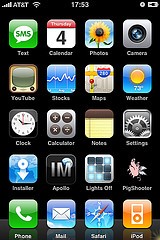 In January, Apple announced it had launched over 15,000 applications on its iPhone. In two months, that number has already jumped to 25,000.

– The most popular pricepoint is $0.99, not free. (Interesting!) Some 10,274 applications cost $0.99 versus 6,044 that are gratis. (Most developers would have to sell a ton of applications to make any real money; it’s definitely a labor of love for most developers.)

– Apparently there is a market for expensive applications: Apps priced at $9.99 are the sixth-most popular on the iPhone (there are now 700 of them).

How much would it cost to buy every single iPhone application? About $71,442.69.