Jamie Rayko was visiting Orlando, Fla., in 2007 when her 7-year-old daughter became separated from the group during a trip to a theme park. 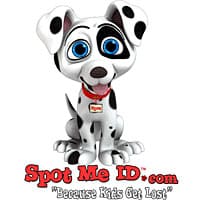 Her daughter found a park employee to help her, but in the panic of the moment, she couldn’t remember her mother’s cell-phone number. There was no way for the employee to call Rayko to tell her that her daughter was safe.

“It was just an absolute horrifying experience,” said Rayko, a mother of three.

The family was eventually reunited – and that terrible experience spawned a business.

Rayko, who now lives with her family in Celebration, Fla., the Disney-built community in Osceola County, has created a line of lanyards, bracelets and temporary tattoos for children to wear when visiting large, busy venues such as theme parks or sporting events.

What she’s selling, she says, is peace of mind. Priced at about $8, the Spot Me ID comes with a permanent marker, so parents can write a contact phone number on the identification tag in case the child gets separated from the family.

“You really can’t tell a 3-year-old to find a meeting place in Disneyland,” Rayko said. “Everybody has a cell phone. It’s simple. And it works.”

The products are illustrated with a cartoon dog, Spot, drawn in various situations, such as riding a roller coaster, at the beach and playing football.

Rayko said the goal was to create something fun that children would want to wear.

The Spot Me ID recently got a big break when Universal Studios starting stocking it. Rayko said her creations are located right where most parents head first when they arrive at the theme park: guest relations, near the stroller rental.

A spokesman for Universal Studios confirmed the park carries the product, though the company does not comment on its vendor relationships.

Logo from Spot Me ID