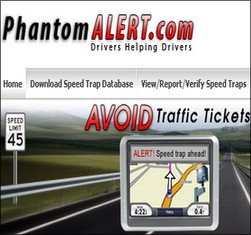 Steven Forage, a software salesman who spends at least five hours a day in his car, juggles a lot on the road: finalizing deals over the phone, sipping coffee, checking e-mail. One thing he no longer worries about, though, is speed cameras.

“Fuzz alert,” an electronic voice called out from the console of his Cadillac recently as it approached a speed enforcement camera in Montgomery County.

The system, known as PhantomAlert, feeds the locations of speed cameras and red-light cameras into standard Global Positioning System devices and prompts the devices to warn drivers when they are near one. PhantomAlert has subscribers throughout the nation, including more than 2,000 in the Washington region, said the company’s owner Joseph Scott.

Scott and a handful of employees scour government and police Web sites for camera locations. But subscribers send in most of the locations, which are added to PhantomAlert’s database.

Scott said police should be thrilled by PhantomAlert, particularly because officials say speed cameras are designed not to generate money but to slow drivers.