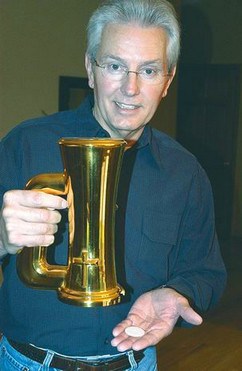 The current panic over the H1N1 flu pandemic couldn’t have happened at a better time for one local inventor, reports The New Richmond News.

Doug Henricksen of rural New Richmond is close to ramping up production on his newest invention — a germ-free dispenser for communion wafers.

Henricksen has begun marketing the Communalabra Germ-Free Communion Host Dispensing System to churches worldwide via the Internet. Reaction to the product from pastors and lay leaders has been promising so far.

“Everybody I’ve showed it to has loved the product and loved the idea behind it,” Henricksen said.

He’s now gathering orders for the dispenser once the first Communalabras are produced.

Henricksen came up with the idea for the dispenser more than three years ago while attending church. It was the cold and flu season, the pastor had a cold and surrounding parishioners were coughing and sneezing.

When it came time to take communion, Henricksen said the thought of all the germs being spread via the handing out of communion wafers turned his stomach.