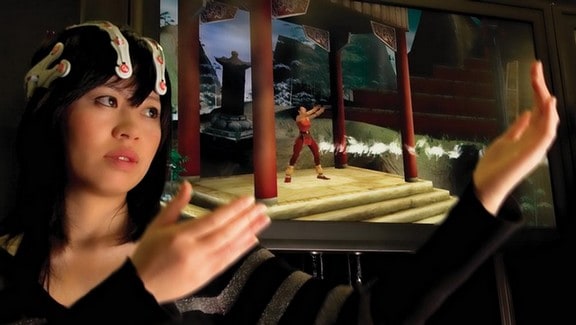 Plastic tendrils are clutching my temples, reading electric signals from my brain. I’m sitting in a conference room in San Francisco looking at an orange box floating on a large flat screen. My goal is to make it disappear using nothing but thought. “Cheshire cat,” I think, and the box starts to fade.

No, Chris Taylor at CNNMoney hasn’t turned into the Mad Hatter, though the device he’s wearing may make him look like one. He’s trying out the Epoc headset, made by a company called Emotiv.

Earlier I calibrated the Epoc by thinking of commands for the orange box when the program asked for them: move left, move right, rise, drop, stop. For disappear, I thought of Lewis Carroll’s vanishing kitty. The Epoc just proved it can remember which areas of my brain lit up while I did that.

“Electric information from the brain is broadcast on the inside of the skull, which is how the headset picks it up,” says Tan Lee, president of Emotiv, via a videoconferencing system. (Like the company’s 10 research scientists, she is in Sydney; 20 employees work in San Francisco.) “By the time it gets to the skull, that information looks very different from the way it does on an MRI scan. So we basically had to unfold the cortex to learn how to read it.”

The $299 Epoc headset launches in early 2010, along with the Windows software that calibrates it. Emotiv’s four scientist-founders hope to make it the basis of a whole new system of computer game playing: “Pressing a button to cast a magic spell doesn’t give you a fulfilling experience,” Lee explains. “But thinking that spell does.”

The Epoc’s tendrils are set to stretch far beyond games. Emotiv has received requests for developer kits from 10,000 software engineers around the world. Applications have been suggested in industries such as aerospace, education and healthcare. Some people with disabilities are already using the Epoc to control their wheelchairs.