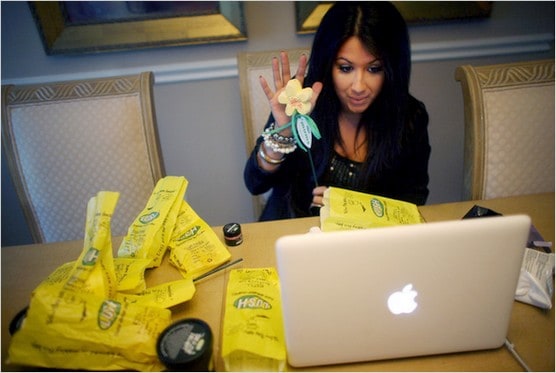 Melissa Ponce De Leon, a 19-year-old bartender from the Bronx, had just gone shopping. When she got home she sat in her tiny peach-colored room, leaned into her Web cam and held up her swag: a few MAC lipsticks, a glittery black V-neck top, a snake bracelet and a new pair of Ugg boots.

According to The New York Times, this is a haul video, a phenomenon that has been sweeping YouTube for more than a year in which women, most of them young, methodically share their fashion and beauty purchases. The videos are the virtual equivalent of watching a girlfriend show off her finds after a shopping trip. And, in a recession, they fulfill a voyeuristic thrill: seeing how other people spend money.

Haul videos have also turned into a lucrative enterprise for some. Ponce De Leon, for instance, earns $1,000 a month through YouTube’s “partners” program, which gives members a share of the profits from advertisements that appear with their videos. Some haulers receive money from the companies whose products they review – usually in disclosed, sponsored posts, but sometimes under the table.

Haulers with corporate sponsors sometimes host contests, giving away products as a way to attract new subscribers. Sometimes the women are paid a commission: Maryapril Bautista of Los Angeles, for example, says she earns a 15 percent commission from a hair care company, Flat Iron Experts, on sales generated by her product reviews.

“We talk about a product, and then we give a link to the Web site,” said Bautista, who uses the screen name AprilAthena7. She makes less than $100 a month because her subscriber base is low, she said, “but a lot of those girls probably have 50,000 and make a couple of thousand a month doing that.”