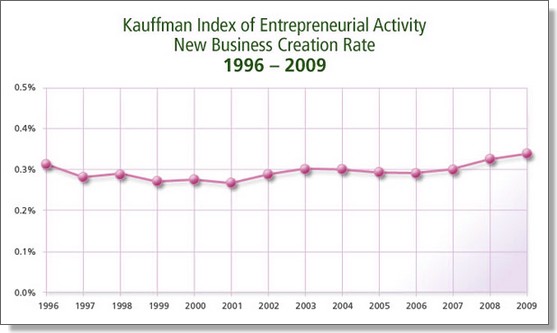 Rather than making history for its deep recession and record unemployment, 2009 might instead be remembered as the year business startups reached their highest level in 14 years — even exceeding the number of startups during the peak 1999-2000 technology boom.

According to the Kauffman Index of Entrepreneurial Activity, a leading indicator of new-business creation in the United States, the number of new businesses created during the 2007—2009 recession years increased steadily year to year.

“Challenging economic times can serve as a motivational boost to individuals who have been laid-off to become their own employers and future job creators,”said Carl Schramm, president and CEO of the Kauffman Foundation.

“Because entrepreneurs drive the economy, the growth in 2009 business startups is encouraging and hopefully points to a hopeful trend in terms of our economic recovery.”