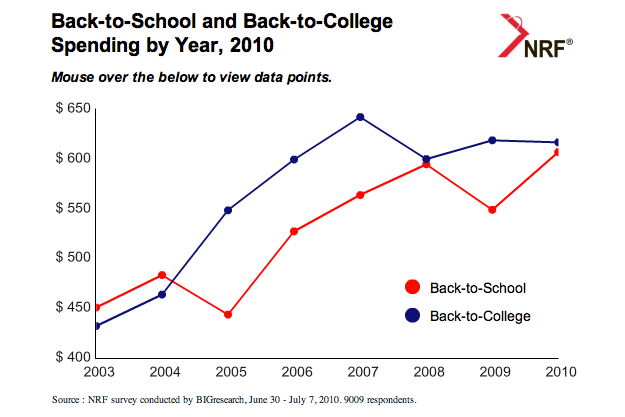 Back-to-school spending is expected to be robust this year as parents replenish their kids’ wardrobes and backpacks after two years of weak demand for school gear.

Having outgrown shoes, shirts and even backpacks they’ve used the last two years, children heading back to school this year will arrive in style. The National Retail Federation’s 2010 Consumer Intentions and Actions Back to School survey, conducted by BIGresearch, found that the average American family will spend $606.40 on clothes, shoes, supplies and electronics, compared to $548.72 last year, and close to the $594.24 in 2008. Total spending on school-aged children in grades K-12 is expected to reach $21.35 billion.

How are you going to profit from this trend?

More charts after the jump.