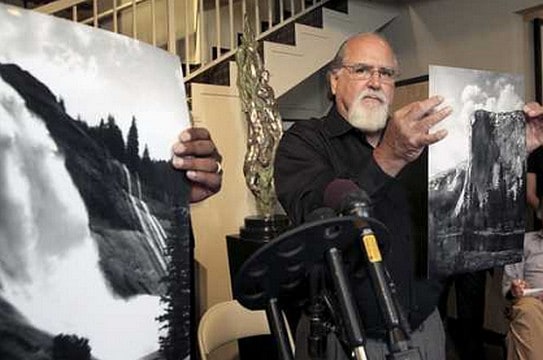 Rick Norsigian, a goateed 64-year-old maintenance worker who has spent most of his life living in the same house on a quiet street in Fresno, has long had a penchant for collecting antiques. His hobby may have paid off in a big way.

The Fresno Bee reports Norsigian and his attorney announced that 60 glass negatives Norsigian bought at a yard sale in Fresno a decade ago for $45 are the early works of famed photographer Ansel Adams.

One appraiser said recently that because they were created between 1919 and the early 1930s — a time before Adams became wildly popular — they are worth more than their weight in gold: at least $200 million.

“When I found out about the value, that made my legs start to shake a little bit,” Norsigian said.

Two handwriting experts have confirmed that notes on envelopes holding the 6Â½-by-8Â½-inch negatives were written by Adams’ wife, Virginia Adams.

One of the photographs captures a scene that has cloud formations and shadows that are almost identical to those in an authenticated Adams photo, according to a meteorologist who examined the negative. That indicates that the photo in Norsigian’s collection was taken at about the same time as the authenticated one.