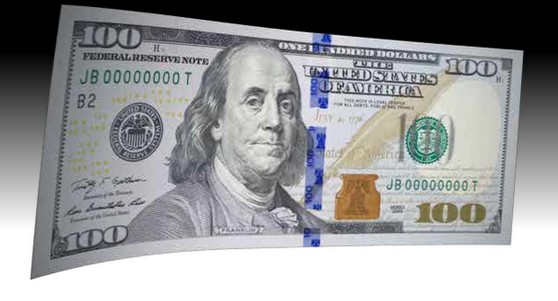 Whoops! The new bills’ high-tech anti-counterfeiting features were too much for government printers. Now about a billion bills are in quarantine, and many will need to be burned.

Printer errors–we’ve all been the victims at one point or another. But what if a printer error set you back $100 billion?

That’s the situation the Federal Reserve is in, reports CNBC. It printed 1.1 billion redesigned $100 bills, with new high-tech anti-counterfeiting bells and whistles, only to find that printers had botched the job on an unspecified number of them, leaving part of the face unprinted.

$110 billion dollars represents over a tenth of worldwide U.S. currency. The cash is being quarantined, where it will remain until the government finds a mechanized way to sort the defective bills from the properly printed ones. To sift through that quantity of banknotes by hand would take between 20 to 30 years; a machine could handle it in about a year.

The bills cost twice as much as normal bills to produce–12 cents apiece–which means it spent about $120 million on unusable bills. Ouch!

Editor’s Note: Perhaps the government should auction off the rights to burn the $120 million unusable bills. Surely there is a super rich South American or Pacific Rim billionaire who would love the notoriety of setting fire to $120 million in US currency and then televise it on a Sunday night with huge prices for TV commercials. They might get at least half back. Just a thought.