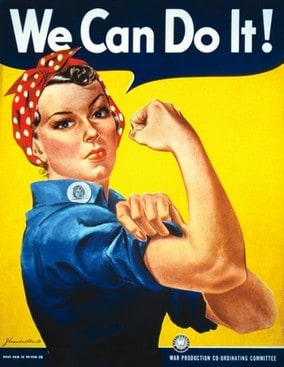 Geraldine Doyle was just 17 when she took a job at a metal pressing plant near Ann Arbor, Michigan in 1942.

AFP reports that she was there when a United Press International photographer came to the factory while documenting the contribution of women to the war effort.

A picture of Doyle was later used by J. Howard Miller, a graphic artist at Westinghouse, for the poster which was aimed at deterring strikes and absenteeism.

The poster was not widely seen until the 1980’s when it was embraced by the feminist movement as a potent symbol of women’s empowerment.

The iconic image now graces a US postage stamp and has been used to sell lunch boxes, aprons, mugs, t-shirts and figurines.

The term “Rosie the Riveter” stems from a 1942 song honoring the women who took over critical factory jobs when men went off to war.

Doyle didn’t realize she had a famous face until she was flipping through a magazine in 1982 and spotted a reproduction of the poster, her daughter told The New York Times.

Geraldine Doyle died Sunday, a spokesman for the Hospice House of Mid Michigan told AFP. She was 86.