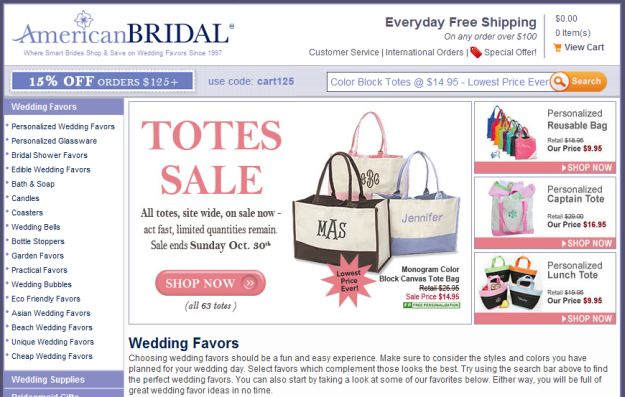 Interesting in selling or buying an eCommerce company? Shirley Tan describes to Practical eCommerce the process she went through when selling AmericanBridal.com.

PEC: How did you find the buyer?

Tan: “First, I made a list of who I thought were the most likely prospects in acquiring the business. I looked at which companies online currently would benefit from our database, the list of customers that we’ve acquired over time. I made a list of all those potential buyers, and then I made another list of companies that are competitors. Then I put in criteria: who’s going to have the money to pay me, am I going to be able to get out in a year, how long will I have to stay, things of that nature. So, I made all these criteria, what I would do if I were buying a business, and then I called all the long shots first, sort of like my ‘Hail Marys.’ That’s the only thing I know about football, you throw your Hail Mary out there and see who catches it, right? That’s what I did, and I practiced on all those people first because I figured, well, they’re going to say no anyway so I might as well get all the rejections out of the way and by then my pride won’t get so beaten up because I’ll be sort of used to it. So, that’s what I did.

“And at the end, by the time I got to The Knot, it was pretty straightforward. I called up the CEO and told him, you know, two sentences and he said, ‘We’ll call you next week,’ and they did.”

PEC: You talked to the CEO of The Knot and that person says, ‘We’ll call you back.’ He called you back, and from that conversation until you closed, how long did that take?

Tan: “That took almost a year. Things take time and so it’s good to start early. Start to get the conversation going. And, I wasn’t only talking to them, I was talking to other people too. You just don’t know which conversation is going to get further into the process. You call a whole bunch of companies because you just don’t know which deal is actually going to close and the timing of it all as well.”