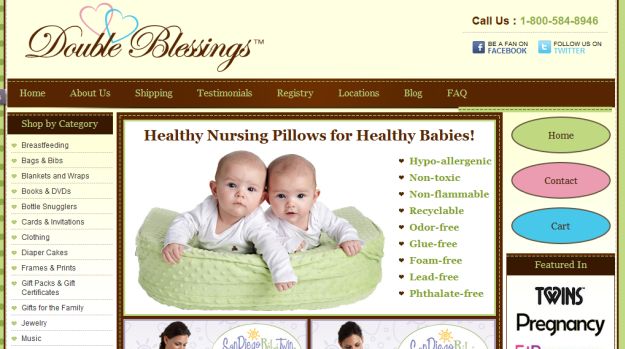 The economy has been rough on many entrepreneurs. However, one mompreneur, Sandy Clark, found a way to keep her business alive.

Clark, a “mompreneur” from San Diego, had just begun nursing her twins when she started DoubleBlessings.com in 1995. Her mission at the time was simply to empower new mothers of twins to breastfeed their own “double blessings.” It was a labor of love for Clark, who wanted to give back to the nursing community that had helped her successfully breastfeed her own twins. Clark’s first product was the patented EZ-2-Nurse TwinsÂ® Nursing Pillow, which has since helped countless mothers make the choice to nurse their twins.

But in 2009, faced with a slowdown in sales and watching other small businesses closing up shop at an alarming rate, Clark knew she needed to think outside the box if she wanted to keep her passion alive in the new economic reality. She was already watching every dollar that went into production, marketing and overhead. The daunting task ahead of her: deliver an even better product while staying competitively priced.

In short, drew upon every bit of experience she had gained in the past 16 years to change everything. She added more features, changed factories, and insisted on more involvement from her factory representative and greater expertise from her suppliers. She expanded her product line, adding a singleton nursing pillow with the twin-pillow features that had benefited so many families.

“I redesigned, retooled, reconsidered, and repackaged,” Clark said. “Then I re-launched my existing website into a new store platform. I even renamed my product.”