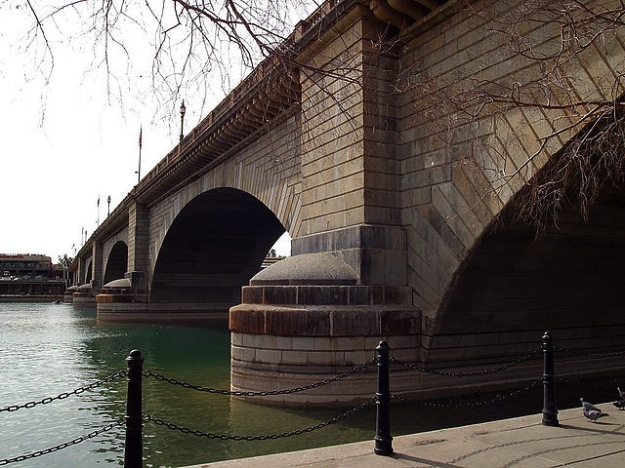 In 1967, the Common Council of the City of London placed the bridge on the market and began to look for potential buyers. Council member Ivan Luckin had put forward the idea of selling the bridge, and recalled: “They all thought I was completely crazy when I suggested we should sell London Bridge when it needed replacing.” On 18 April 1968, Rennie’s bridge was sold to an American. It was purchased by the Missourian entrepreneur Robert P. McCulloch of McCulloch Oil for US$2,460,000. The claim that McCulloch believed mistakenly that he was buying the more impressive Tower Bridge was denied by Luckin in a newspaper interview.[19] As the bridge was taken apart, each piece was meticulously numbered. The blocks were then shipped overseas through the Panama Canal to California and trucked from Long Beach to Arizona. The bridge was reconstructed at Lake Havasu City, Arizona, and re-dedicated on 10 October 1971.