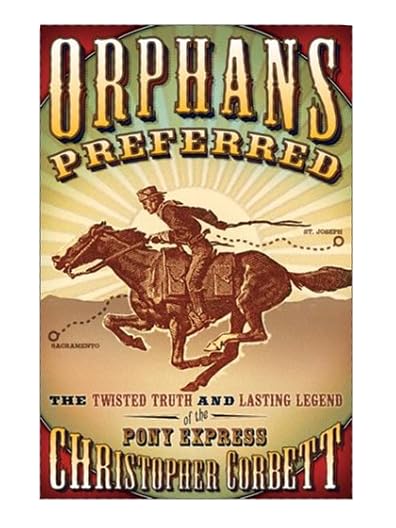 On this day in 1861, the First Transcontinental Telegraph line across the United States is completed, spelling the end for the 18-month-old Pony Express.

As one reviewer wrote:

Chances are you never heard of the great nineteenth century freight-hauling firm of Russell, Majors & Waddell. You never heard the official name of the firm’s most famous effort, the Central Overland California & Pike’s Peak Express Company. You have certainly heard of the popular name of the endeavor: the Pony Express. You know the Pony Express, because from its beginning, it was the stuff of legend, and the legend has never stopped growing. That is the main point of Orphans Preferred: The Twisted Truth and Lasting Legend of the Pony Express (Broadway Books) by Christopher Corbett. Corbett has given as good a history as can be written about the Pony Express because he has shown what difficulties there are in digging up such history. “We know that much to be true” becomes a frequent refrain in his work to emphasize how little we really know of the truth. It isn’t important. The legends about the Pony Express may not be literally true, but they are real and they mean something, and Corbett’s book is about them as much as it is about plain facts.