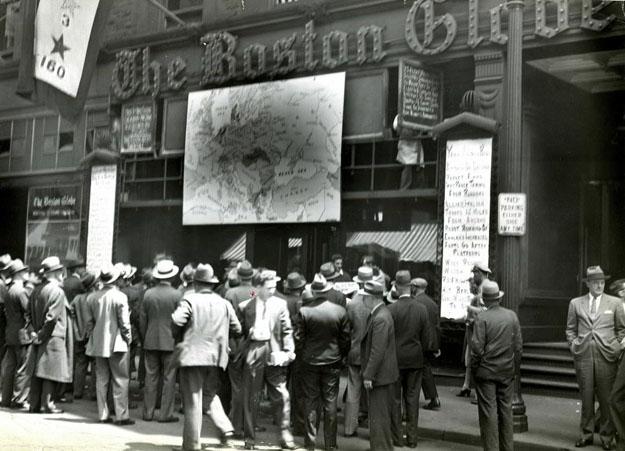 Long before the internet, The Boston Globe had a free, real-time, ad-supported product: headlines written on chalkboards inside the windows of their storefront on Boston’s Newspaper Row.

From at least the turn of the century until the 1950s, Globe staff shuttled back and forth throughout the day from the newsroom to the street. There they wrote breaking news headlines and sports scores on four blackboards and two enormous sheets of newsprint. Behind the Globeâ€™s windows? Ads.

Breaking news â€“ a bank holdup, a bus accident, the death of FDR â€“ was quickly featured on the storefront (NB: usually in 140 characters or less). The storefront even offered streaming multimedia of a kind: telegraph dispatches of boxing matches and baseball games were shouted out play by play through a pair of loudspeakers.

Different â€œlayoutsâ€ were used. During World War II an outsized map of Europe loomed over the storefront. For Red Sox World Series appearances, a scaffold was built. Sports desk hacks stood on it to chalk up the scores for bowler-hatted crowds numbering in the hundreds.