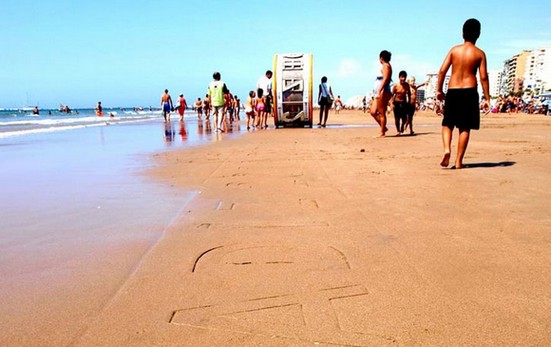 There is another printer though, in a wheel form, not yet known worldwide that does not need ink or paper to print, but is faced on the other hand with the minor problem, that the letters Â«writtenÂ» with it, disappear with every next incoming tide (or with the wind, when the sand used as base is dry). In other words, a printer that doesn’t cause any world altering visual impact except when it is in fact spinning with the kids riding on it, while giving it the energy it needs, according to a story at Gizmodo.

This weird printer of a wheel made by Zanadesign, a Spanish design consultancy specialised in conceptual design —and of non organic materials so it doesn’t have impact to the beach and heavy enough to be used by a child but not pushed by the wind- is actually being used to spread the message of the commemoration of the first constitution of Spain in 1812 proof of peace, freedom and democracy.