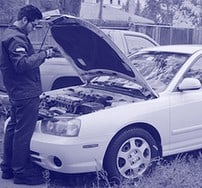 Like many drivers, Fletcher scaled back his automotive aspirations because of the economic downturn. “My portfolio lost about 40% last year, so I’m certainly in no mood to buy a new car,” says the retired sales and marketing executive from Pinehurst, N.C. To that end, he’s making a point of changing his oil and other fluids regularly and keeping his tires properly inflated to help them last longer.

Today, the scarcity of attractive terms for financing and leasing means that many people are keeping the cars they have. As a result, car dealerships are quiet while service shops buzz.

While many in the industry predict a return of demand for new vehicles within a year, others detect a deeper shift in consumer attitudes.

But that could change for good in a drawn-out recession. If the downturn lasts another year or two, he says, a “new frugality” could take hold that would include longer-term car ownership and disdain for pricey new models.