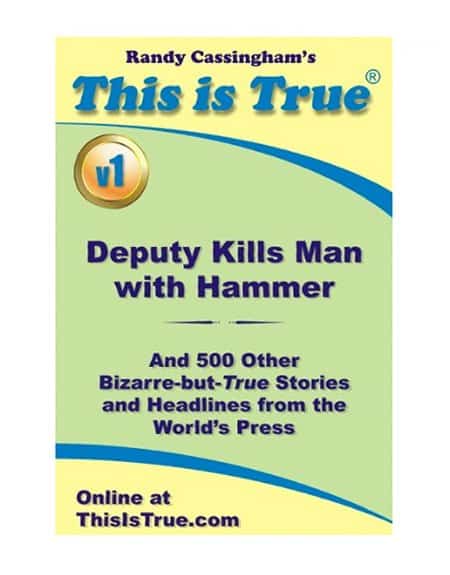 Randy Cassingham is one of the first online publishers: his This is True column went online in 1994. It’s his full-time gig: over the years, it has brought him several million dollars in income, and he lives on 45 acres in western Colorado, where he looks at gorgeous snow-covered mountains from his home office.

“TRUE” (as Cassingham calls it) is biting social commentary, using weird news as its vehicle. It’s funny and has a loyal following: thousands pay $24/year to get the full column by e-mail each week. Tens of thousands get a free sampler. It might be the first example of an online “fremium” business model. In the early years, he turned down two unsolicited syndication deals to bring the column to newspapers — turning them down because he didn’t want to give up control of his work, he says.

Good move: now he’s compiling his archives into Kindle books, where he can get a 70% royalty on sales, rather than the 12.5% that Dutton (part of the Penguin Group) pays him when it turned another of his websites into a book.

And it’s working: Cassingham told me that in the first two weeks of Kindle book sales, the five volumes he has posted so far earned more than $1,400 in royalties from Amazon. “I’m boggled,” he told me by e-mail. “Imagine if I actually concentrated on this income pillar. Or had more than five books available. Or I sent one or more titles out for review somewhere, or advertised, or did ANY kind of promotion to anyone other than my existing readers!”