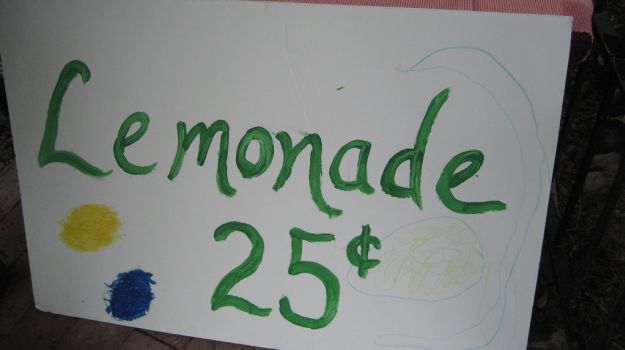 As the recession continues to make it difficult for some people to find new jobs others are taking to the street. This summer if you look out your door to find a grown man trying to sell lemonade next door to your 8 year old’s stand now you know why. The New York Times recently reported on a new trend in the Park Slope section of Brooklyn.

Michael Orobona, a restaurant consultant who celebrated his 40th birthday this month, has been setting up a table outside his apartment on Union Street near Fifth Avenue every weekend this summer. He said he originally intended to strike a partnership with some neighborhood children in a mutually beneficial joint venture, but refused to let their lack of interest dissuade him.

“I’m getting to know my neighbors and my community,” he said on a sweltering Saturday afternoon, selling what he said was organic lemonade to a woman in a floral dress ($4 for a 24-ounce cup). “I don’t just sell them lemonade, I tell them about my life.”

A few blocks to the east, in the shadow of the food trucks parked along Grand Army Plaza, sat Jim McMahon, a sophomore at the University of Rhode Island. His colorful homemade sign read, “College Tuition Smoothies, $4.”

Mr. McMahon, a lanky Park Slope native, has set up shop on the stoop of his family’s brownstone every weekend afternoon since early July with a blender, some fruit and a sunny disposition.

The blurring of childhood and maturity has long been a theme in Park Slope. It was here in 2008 that parents raged against a local bar that tried to ban strollers during happy hour. And good luck telling the difference among members of the X, Y and Z generations based solely on their taste in sneakers or skateboards.