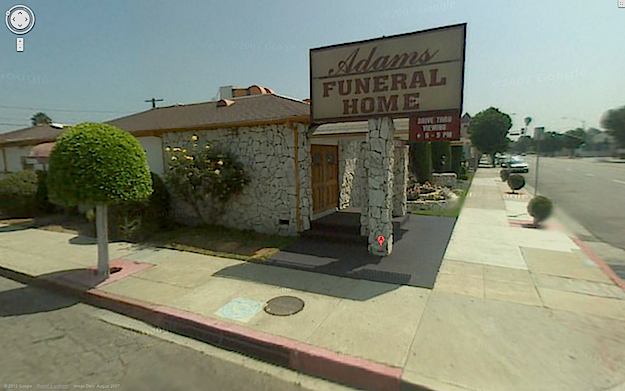 How do you hold gang funerals if rival gangs turn graveside services into shootouts? On funeral home in Compton, California has figured it out: drive thru funerals. The Christian Post has the story:

According to the funeral home’s office manager, the drive-thru service is primarily intended for elderly visitors who may find it difficult to move or for those who are physically impaired.

Denise Knowles-Bragg, the office manager at the Robert L. Adams Mortuary, told Reuters news agency that the drive-thru convenience is also for visitors who want to pay their respects during their lunch hour, and is especially useful for families who expect many guests at a service.

The funeral home was named for owner Robert Lee Adams Sr., reportedly a former local politician. According to his wife, Peggy Scott Adams, who was widowed in 2005, the drive-thru service became popular in the 80s, when the area was plagued by gang violence, including shootouts during burial services at cemeteries.

Video from the Los Angeles Times below.