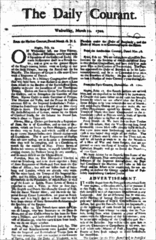 On this day in 1702, The Daily Courant, England’s first national daily newspaper is published for the first time.

The paper was first published by Edward Mallet:

The paper consisted of a single page with two columns. Mallet advertised that he intended to publish only foreign news and would not add any comments of his own, supposing other people to have “sense enough to make reflections for themselves.”

The paper lasted until 1735 the paper when it was merged with the Daily Gazetteer.