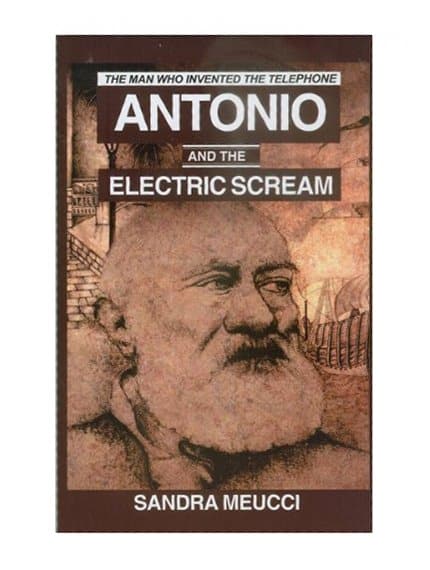 For more about Antonio Meucci, read Antonio and the Electric Scream—The Man Who Invented the Telephone:

Antonio Meucci represents an unlikely story in American history. Having come of age in Florence, Italy, he immigrated to America by way of Cuba, where he lived for many years and where he worked with the Italian Opera Company. Familiar with telegraphy, wherein intelligence (information) was being transmitted through a wire, he proposed to transmit human voice through the same type of wire. Having come to New York, and having established several kinds of business, he experimented with his telettrofono (electric phone). Satisfied with the results of having transmitted voice intelligence from one end to the other end of copper wire, Meucci applied for a patent and received a caveat instead. A. Graham Bell, however, received a patent for a similar invention. Now, finally, after more than 160 years, Meucci is being vindicated: 1) A Silver and Bronze Medal were struck by The Italian American Bicentennial Society. 2. The Meucci-Garibaldi Museum has been established in New York. 3. The US Postal Services has published a commemorative stamp, and, 4. The 107th Congress of the United States resolved to recognize Meucci as the inventor of the telephone.