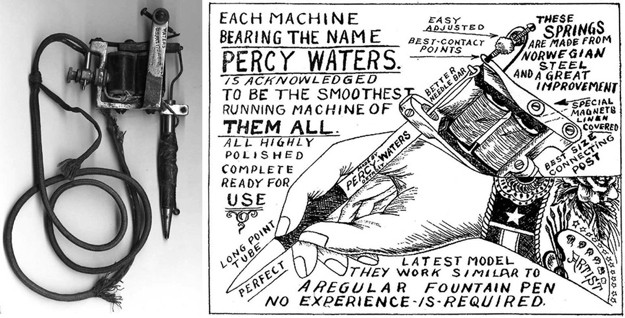 Tattooing really took off after 1870, when the first professional tattoo shops opened in the United States and Great Britain. In America, the earliest tattoo parlor is attributed to a German immigrant named Martin Hildebrandt, who opened his business in lower Manhattan. Hildebrant practiced the slow art of giving tattoos by hand, using a row of needles attached to a wooden-handle which was rapidly tapped upon the skin. At the time, tattooing was an artisan trade typically learned by working with a well-established tattooer. â€œIt was a craft,â€ says Eldridge, â€œusually learned through an apprenticeship. Itâ€™s exactly the way a seamstress would hem your pant cuff with a needle and thread rather than a sewing machine. They learned to manipulate the needle into the skin and to create designs by hand.â€

In 1891, New York tattooist Samuel Oâ€™Reilly transformed Thomas Edisonâ€™s reciprocating pen used for engravings into an electric tattoo machine, and tattooing became a bona-fide industry. Though the tattoo machine has been improved, notably in the late â€™20s by Percy Watersâ€™ devices, which used alternating electromagnetic currents to propel the needle bar, the basic technology used to insert ink into skin remains virtually unchanged. As Eldridge says, â€œItâ€™s like the wheel: They invented it and the damn thingâ€™s still round. Of course, there have been refinements and the machine is more sophisticated, but the basic design principle is the same.â€