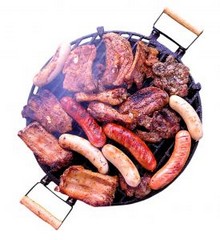 As Memorial Day, the unofficial beginning of the summer grill season, looms, the industry remains red hot. Here’s a tasting platter of stats.

More than 74 million American barbecued in 2007.

According to a Web survey, most Americans decide when to take their food off the grill by cutting into it, seeing “if it looks done,” and/or “poking it with a fork.”

The George Forman grill has sold almost 100 million units since its 1995 debut.

19% of Americans prefer to grill indoors.

In the summer, the average American grill owner spends 4.4 hours barbecuing each week.