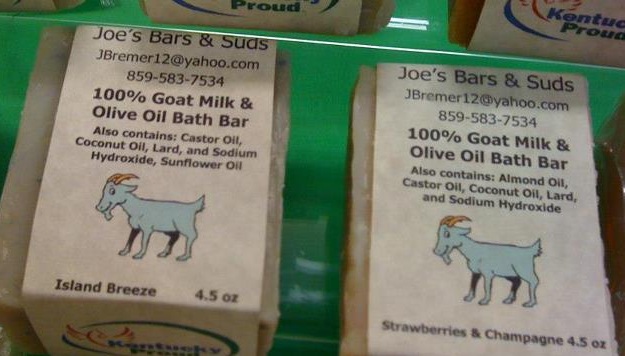 Raising goats and making soap have become second nature for Joe Bremer. The 14-year-old Chicagoan-turned Danville resident launched his own soap-making business in 2010.

Joe’s Bars and Suds began after many visits to a soap store in Tarpon Springs, Fla., which had “10 by 10 walls” full of soap. Bremer says they used a ladder there to reach the highest shelves.

“He figured if someone else could do it, and they made soap in ancient times from goat milk and olive oil, he could make soap. too,” says Bremer’s mother, Jackie.

Bremer kept after his parents to let him have a goat when they were living in Chicago, but there wasn’t enough space to keep one. They also couldn’t find a place to buy goat milk.

When they relocated to Kentucky, he tried to convince them to let him get a horse, then a cow. Of both animals, his mom said they simply didn’t have enough land. Finally, he settled back on goats. This time, he got his wish.

He began showing goats when he was 11, through the help of organizations like the Boyle County Livestock Club and the Fort Harrod Goat Club.

As with his quest to get an animal, Bremer wanted to start making soap. He kept trying to convince his mom to let him and says “finally, I wore her down.”

Is Dropshipping Jewelry a Profitable Business?