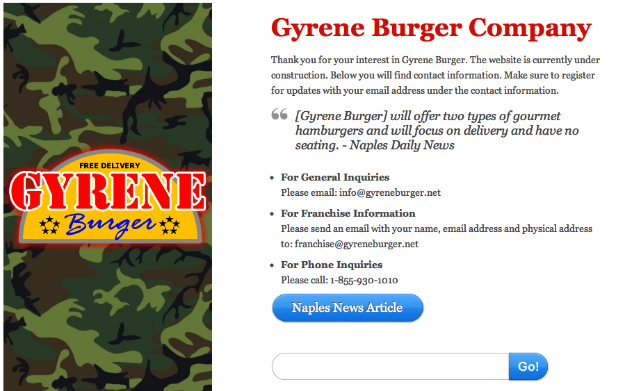 The founder of Domino’s Pizza knows delivery. One day, he asked himself, what’s more popular than pizza? Hamburgers, of course!

“We will franchise, but not immediately,” a confident Monaghan said. “This first store is a test. If there’s anyone who knows how to grow an organization it’s me.”

He thinks the business could be even bigger than Domino’s one day, with 6,000 stores in the U.S. alone, and that many or more in the rest of the world.

He’s kept the new concept simple, based on what he learned from past mistakes at Domino’s, which he sold in 1998 after building it into a vast pizza empire with more than 6,000 stores. He sold Domino’s to focus on building Ave Maria University, which he founded in 2003.

Gyrene Hamburger will only sell hamburgers, which will make the operation run more efficiently and speed delivery. There will be no sides and no drinks.

There will be two hamburger choices, with each burger costing a little less than $6: The classic with ketchup, mustard and pickle and the deluxe with lettuce, tomato and mayonnaise. Both hamburgers will have double Angus beef patties, plus cheese and bacon.

“That’s it. No substitutes,” Monaghan said.