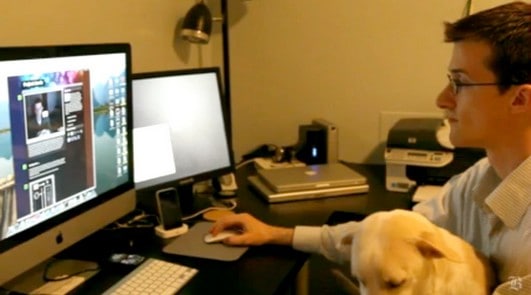 According to a story in The Boston Globe, it’s when Chad Barraford opens his front door and swipes a radio frequency identification tag through a scanner linked to his home computer that extraordinary things happen.

Welcome home, Chad,’’ says a voice coming from a wall speaker. “You’ve been away for 1 hour and 15 minutes.’’

Time and temperature are announced. Bedroom lights blink on. Barraford’s dog, Miles, is greeted, too. By name.

Seconds later, the desk light glows. Barraford, thinking he might watch a movie later, wants to know which Netflix selections he has. “Four, sir,’’ replies Jarvis, reading off each title.

Clearly, Jarvis is one handy fellow to have around. Not just a figment but a product of Barraford’s rich imagination, Jarvis is a nexus of online resources, customized and accessed to fit Barraford’s personal needs.

A “digital life assistant,’’ or DLA, as Barraford calls his creation, programmed to give updates on everything from FedEx shipments to Facebook postings, CNN breaking news to the groceries in the pantry.

Compared with much of what’s marketed as “smart home’’ technology, Jarvis is both a marvel and a bargain. He runs on a 4-year-old Mac Mini computer with built-in speech recognition — and virtually no additional bells and whistles.

Barraford has calculated, down to the penny, how much he has spent on a DLA that does everything but brush his teeth. To date, the figure stands at $691.98.

Photo by The Boston Globe.