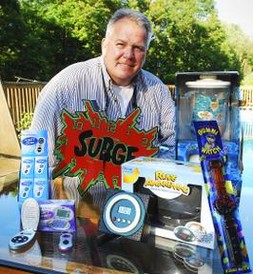 Leslie Mann has always thought outside the box – like the time he created a wristwatch with miniature items floating in a bubble concoction enclosed in the dome of the watch.

Or, the rude-awakening alarm clock that blurts insults to snoozers.

As an inventor, and owner of BCP USA, Mann probably invented the box he’s thinking outside of. He considers himself to be an inventor and innovator, he said.