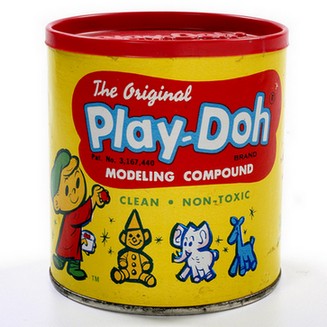 We tend to hold inventors in high esteem, but often their discoveries were the result of an accident or twist of fate. This is true of many everyday items, including the following surprise inventions.

1. Play-Doh
One smell most people remember from childhood is the odor of Play-Doh, the brightly-colored, nontoxic modeling clay. Play-Doh was accidentally invented in 1955 by Joseph and Noah McVicker while trying to make a wallpaper cleaner. It was marketed a year later by toy manufacturer Rainbow Crafts. More than 700 million pounds of Play-Doh have sold since then, but the recipe remains a secret.

2. Potato Chips
If you can’t eat just one potato chip, blame it on chef George Crum. He reportedly created the salty snack in 1853 at Moon’s Lake House near Saratoga Springs, New York. Fed up with a customer who continuously sent his fried potatoes back, complaining that they were soggy and not crunchy enough, Crum sliced the potatoes as thin as possible, fried them in hot grease, then doused them with salt. The customer loved them and “Saratoga Chips” quickly became a popular item at the lodge and throughout New England.

3. Slinky
In 1943, naval engineer Richard James was trying to develop a spring that would support and stabilize sensitive equipment on ships. When one of the springs accidentally fell off a shelf, it continued moving, and James got the idea for a toy. His wife Betty came up with the name, and when the Slinky made its debut in late 1945, James sold 400 of the bouncy toys in 90 minutes. Today, more than 250 million Slinkys have been sold worldwide.

4. Saccharin
Saccharin, the oldest artificial sweetener, was accidentally discovered in 1879 by researcher Constantine Fahlberg, who was working at Johns Hopkins University in the laboratory of professor Ira Remsen. Fahlberg’s discovery came after he forgot to wash his hands before lunch. He had spilled a chemical on his hands and it, in turn, caused the bread he ate to taste unusually sweet.

In 1880, the two scientists jointly published the discovery, but in 1884, Fahlberg obtained a patent and began mass-producing saccharin without Remsen. The use of saccharin did not become widespread until sugar was rationed during World War I, and its popularity increased during the 1960s and 1970s with the manufacture of Sweet’N Low and diet soft drinks.

5. Silly Putty
It bounces, it stretches, it breaks — it’s Silly Putty, the silicone-based plastic clay marketed as a children’s toy by Binney & Smith, Inc. During World War II, while attempting to create a synthetic rubber substitute, James Wright dropped boric acid into silicone oil. The result was a polymerized substance that bounced, but it took several years to find a use for the product.

Finally, in 1950, marketing expert Peter Hodgson saw its potential as a toy, renamed it Silly Putty, and a classic toy was born! Not only is it fun, Silly Putty also has practical uses — it picks up dirt, lint, and pet hair; can stabilize wobbly furniture; and is useful in stress reduction, physical therapy, and in medical and scientific simulations. It was even used by the crew of Apollo 8 to secure tools in zero gravity.