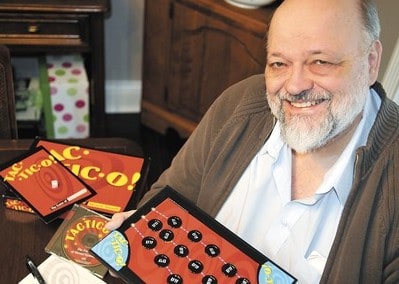 Sometimes mathematics gets a bad rap.

Kids whine that it is too hard or boring. Parents get frustrated helping with homework. But a local man has invented a board game he said gets kids excited about the often-dreaded school subject, reports Durhamregion.com.

The board game, created by Greg Soave, is called TACTICO! The game isn’t new; Soave invented it as a boy while he sat in his father’s ’57 Chevy waiting for his dad, who was doing television and radio repairs.

The game revolves around subtraction. Two players take turns removing game pieces (up to four per turn) from the board until one round game chip is left. Whoever gets stuck with the last piece has to turn it over and reveal a number between one and 10. That numeral is the amount of points the loser of the round is stuck with. The first player to collect 30 points has to accept defeat at the hands of their opponent.

It’s a game of strategy where each player has to pay attention to his opponent’s moves and quickly calculate how many chips remain.

The game is currently in 71 schools and has been purchased by Corrections Canada, Mr. Soave said.

“I hope to bring the game worldwide,” he said.