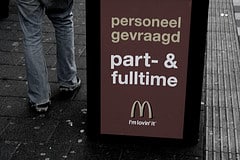 For several months now, some companies have been hiring part time employees, however, they are making no effort this time around to move those employees up into a full time position due to concerns still revolving around the future of our economy, states AbcNews.com.

The reasons vary. But economists and business people say the main obstacle is that employers lack confidence that the economic rebound has staying power. Many fear their sales and the overall economy will remain weak or even falter as consumers spend cautiously. Companies also worry about higher costs related to taxes or health care measures being weighed by Congress and statehouses.

It makes sense. When times are tough and money is tight everyone – including business owners – tend to keep close grips on their pocket books, not wanting to give up any extra money if they can avoid it. There is still a great deal of uncertainty among the public and corporate world and as we all know when there is uncertainty there is tighter restrictions on loans, hiring, buying and so on.

So if your interviewing for a part time position and you have the idea or impression that later down the road it will turn into permanent employment, don’t be so sure, that is not always the case these days. Employers are not looking to hire 10 people only to have to lay them off or fire them 8 months later.