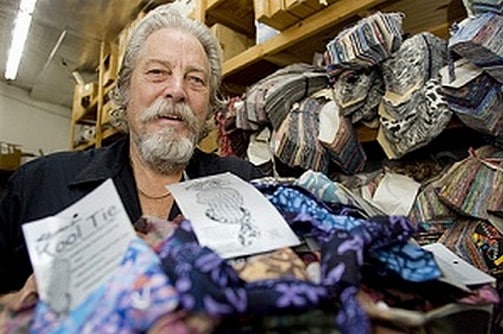 A friend presented Phoenix business owner Steve Kafka with polymer crystals that were used on golf-course grass to allow it to absorb nitrates.

But according to The Arizona Republic, the turning point was when the friend showed Kafka how incredibly absorbent the material was when introduced to water.

He said, ‘If anyone can do something with this, you can,'” Kafka said.

Kafka and his wife, Pam, put their ingenuity and artistic creativity to work, sewed the polymer into high-quality fabric, fashioned it into a scarf and Kafka’s Kool Tie was born.

After the tie is soaked and the polymer crystals absorb the water, it stabilizes body temperature through evaporation when placed by the carotid arteries and major vascular networks, such as those at the back of the neck. It also stabilizes blood pressure.

Photo by The Arizona Republic.