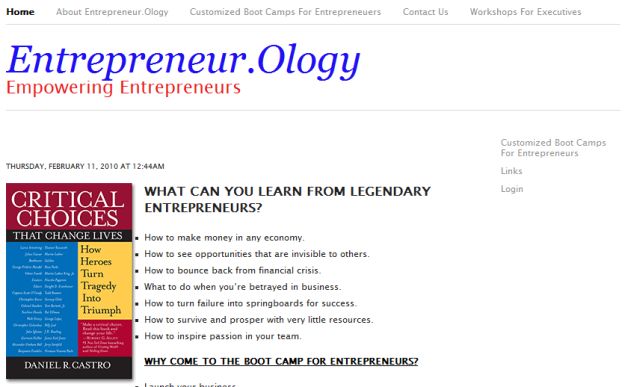 If you have the word “entrepreneur” somewhere within your business or product name, then you’re probably well aware of the siege that Entrepreneur Magazine is taking against businesses like yours.

While they might not be coming armed with guns and ammo, their weapon of choice is the lawsuit reports BusinessReview USA.

For the last several years, the magazine publisher has fought against every entity possible that uses the word “entrepreneur” in their business name. Entrepreneur Media Inc. (EMI) claims to own all rights to the variations of the word.

EMI’s more recent attack is against Daniel Casto, founder of EntrepreneurOlogy, who has also filed a federal lawsuit against EMI. Castro’s lawsuit charges that EMI’s controversial trademarks on the word “entrepreneur” are unconstitutional, invalid, unenforceable, and should be cancelled.

According to the press release, “Castro’s lawsuit is an aggressive response to EMI’s threats to sue him for trademark infringement, unfair competition, deceptive acts and practices, cybersquatting, and misappropriation of goodwill, reputation, and business property, if he doesn’t immediately “cease and desist” all use of the word “entrepreneur,” including EntrepreneurOlogy, a unique word coined by Castro.”

Mark A. Lemley, a distinguished professor of intellectual property law at Stanford Law School who is assisting Castro, points out that, “Trademark law doesn’t give anyone the exclusive right to common English words, much less all variants of those words. Castro is standing up for the rights of entrepreneurs everywhere to use the term entrepreneur.”