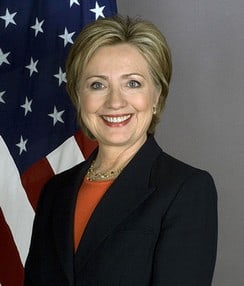 Fast Company reports that Secretary of State Hillary Clinton made a point of stopping by the San Francisco Bay Area to ask for something completely different: the tech world’s energy and expertise.

Over the past couple of years, the State Department has been reaching out to the tech world for help with their diplomatic and development goals, particularly through delegations of tech innovators and entrepreneurs to places like Iraq, Russia, and Mexico, where they’ve explored how the the Internet, mobile phones, and other tech tools can be used to build democracy and combat violence.

The initiatives have apparently been working so well that Clinton carved time out of her globe-trotting schedule to make a public speech–only her third since becoming the country’s top diplomat–to implore the Bay Area’s innovators to join the State Department’s efforts. “Whether you care about Haiti … violence in Mexico from the drug cartels … national treasures in Iraq,” Clinton said, “we want you to know there’s a place for you.”