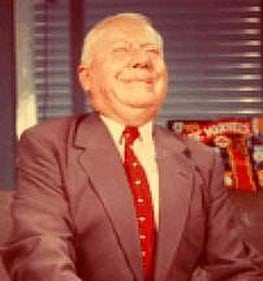 He was born Soren Adam Sorensen in Denmark in 1879 and migrated to the US with his family at age four, and grew up in Perth Amboy, New Jersey where his father operated a saloon.

In 1904 Adams found himself employed as a salesman for a dye company. One of the products he sold caused workers to sneeze, and Sam found a way to extract this derivative from the dye and called this new powder Cachoo. He was inundated by requests for this product from his friends and so, he decided to launch the Cachoo Sneezing Powder Company.

Within a few years, the sneezing powder craze had subsided, and Sam set out to innovating new products. The Exploding Cigarette Box , the Snake Nut Can, Itching Powder, the Stink bomb, and the Dribble glass all entered the Adams line in the next decade. 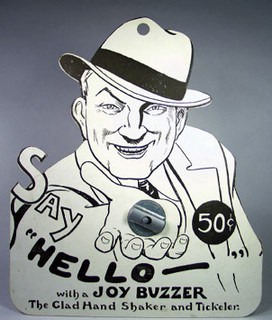 In 1928, Sam invented the prototype of what was to become the Joy Buzzer, a mechanical device placed in the hand, which emitted a loud vibrating buzz, when a button on the buzzer was depressed. This would usually occur when two people shook hands. The success of the item allowed him to greatly increase his staff and purchase a stately new factory building in Neptune, New Jersey, all during the Great Depression.