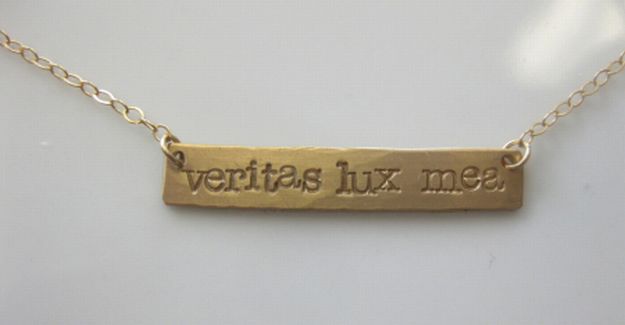 Most people are familiar with the swag bags that guests receive at the Emmys. Arlyne D’Andrea is not only familiar, she was lucky enough to get her company included.

A few weeks ago, D’Andrea received an e-mail asking if she’d like to provide jewelry for 800 swag bags given to Emmy winners, nominees, presenters and audience members attending the 32nd annual News and Documentary Emmy Awards, slated to take place in New York City on Monday.

After checking into it, she found the New Hampshire-based Off the Wall Gifts was legit and does indeed provide official Emmy gift bags for all the National Academy of Television Arts & Sciences Emmy Awards programs.

When D’Andrea began [One Life Jewelry], it was a way for the former New York City fashion designer to work at home as she cared for her sons Nicholas and Matthew, now 8 and 7.

So with her husband Lenny’s support, she began making jewelry. She buys raw, recycled metals, cuts and shapes them, and hand-hammers each message, one letter at a time.

Online customers come from around the world. Most find her by word of mouth or by surfing … Etsy.

Now she’s not sure what to expect, but hopes that fortune does favor the brave.

“This kind of opportunity comes once in a lifetime,” she said. “Either I do it or I don’t. I don’t know what kind of doors it will open, if any.”