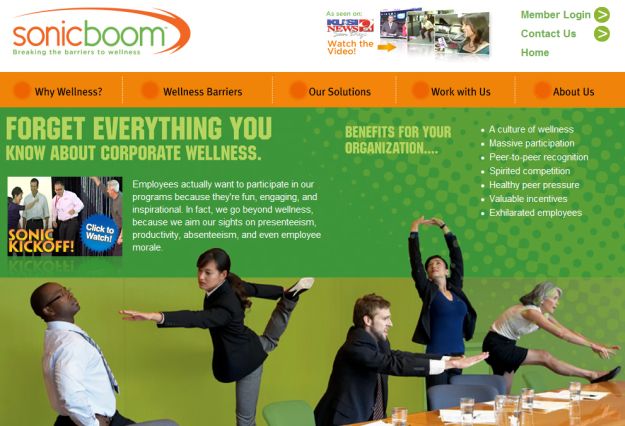 Bryan Van Noy’s journey started after he lost his job. At first he was frustrated, then he decided to start a business.

Van Noy’s startup is fighting office sloth by promoting unorthodox activities such as lunges en route to the restroom and hula-hoops in the halls. It relies on a social media platform that encourages employees to interact and inspire each other.

Sonic Boom users, who engage in a host of fitness and educational challenges to reach goals and win prizes, are anything but constrained. They embrace office rivalry, create custom challenges and reward each other for good behavior. “Sonic Striding” allows them to track everything from lunchtime walks to weekend bike rides using a wireless device that attaches to their shoe, uploading their data into a personal profile.

“We focus on changing people’s habits, making it fun and energetic,” said the effusive Korn, 49, who often travels to a new client’s office for a kick-off event, inciting workers to engage in imaginary football passes, invisible jump rope contests and other affronts to office protocol.

“Last time I did this, I couldn’t get them off the stage,” Korn said, noting Sonic Boom’s nationwide employee participation averages 65 percent – a rate she contends is significantly higher than the industry average.