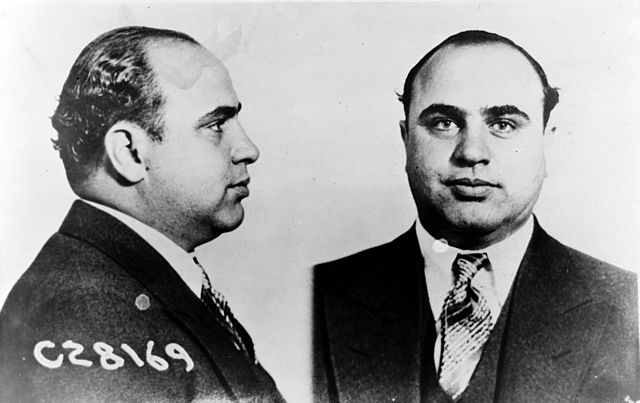 In 1929, the Bureau of Prohibition agent Eliot Ness began an investigation of Capone and his business, attempting to get a conviction for Prohibition violations. Frank J. Wilson investigated Capone’s income tax violations, which the government decided was more likely material for a conviction. In 1931 Capone was indicted for income tax evasion and various violations of the Volstead Act (Prohibition) at the Chicago Federal Building in the courtroom of Judge James Herbert Wilkerson. His attorneys made a plea deal, but the presiding judge warned he might not follow the sentencing recommendation from the prosecution. Capone withdrew his plea of guilty.

His attempt to bribe and intimidate the potential jurors was discovered by Ness’s men, The Untouchables. The venire (jury pool) was switched with one from another case, and Capone was stymied. Following a long trial, on October 17 the jury returned a mixed verdict, finding Capone guilty of five counts of tax evasion and failing to file tax returns (the Volstead Act violations were dropped). The judge sentenced him to 11 years imprisonment, at the time the longest tax evasion sentence ever given, along with heavy fines, and liens were filed against his various properties. His appeals of both the conviction and the sentence were denied.

In May 1932, Capone was sent to Atlanta U.S. Penitentiary, but he was able to obtain special privileges. Later, for a short period of time, he was transferred to the Lincoln Heights Jail. He was transferred to Alcatraz on August 11, 1934, which was newly established as a prison on an island off San Francisco. The warden kept tight security and cut off Capone’s contact with colleagues. His isolation and the repeal of Prohibition in December 1933, which reduced a major source of revenue, diminished his power.

For more on Al Capone, read Mr. Capone: The Real – and Complete – Story of Al Capone.