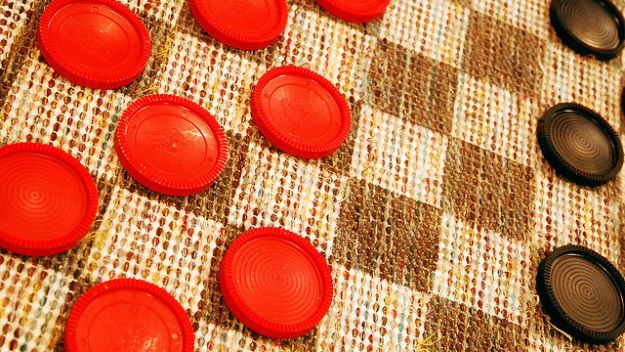 James Pickett is a fan of the movie, Flash of Genius. The movie chronicles the fight that Robert Kearns had to go through to be recognized as the inventor of intermittent windshield wipers. James is in a similar fight for recognition.

Twenty five yeas ago, James came up with the idea to use small football helmets as checker game pieces. If his idea had been successful, he would be a wealthy man, reports WashingtonCityPaper.com.

In 1987, Pickett took a prototype game to the Toy Fair, the mammoth annual amusement-industry gathering in New York. (The 108th rendition of the convention was held last week.) Pickett says a representative from Marino Games, a now-defunct Buffalo-based board game company, took particular interest.

Pickett says he gave the Marino rep a version of his game. But Marino broke off talks without making a deal. By then, Pickett had filed for copyright protections. Artist renderings heâ€™d commissioned also included games featuring major soft drink brands and cartoon and TV show characters. Yet he never found any takers.

Pickett had all but given up ever becoming the king of checkers by Christmas 1994, when he was reading the JCPenney insert in The Washington Post and spotted an offer for something called Redskins Checkers. It looked familiar.

He ran down to the department store and plunked down $25 for a game. Sure enough, the game of his dreams was on the market. Only somebody else was putting it out.

Pickett says heâ€™s still got a plan to get credit for Sports Checkers. He declines to divulge the specifics, but it seems the plan involves the White House and more than one branch of the military. Heâ€™s also found a way to use up all those plastic helmets and boards left over from his first run at becoming king of checkers. Itâ€™s called â€œ4-Way Checkers,â€ and is essentially checkers in which four players get six pieces instead of two getting 12.